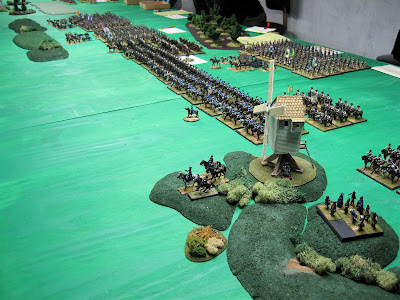 The Erbprinz of Hesse Seewald and his staff watch the battle from their vantage point on the Muhlenberg, while Prussian dragoons and guard cavalry await in the background. Windmill scratch built by Herb Gundt of H.G. Walls. (click the pix to enlarge the view).


Today I am posting several pictures of the large cavalry battle that took place on the Prussian left during the battle of Schaumburg. The Prussians were ably commanded by Jim Fitzgerald while Rich Black handled the Allied cavalry (Austrians, Saxons and French) with equal skill and panache. ( I always like to use words such as "panache", don't you?). 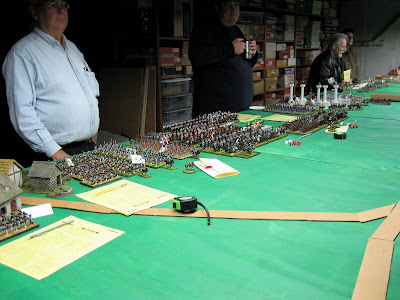 The French Guards Brigade (left) and the French Heavy Cavalry Brigade and their commanders await the orders to unleash their thundering herds upon the Prussians.


I was too busy commanding the attack of the Prussian Guard brigade of infantry and cavalry, so I did not pay much attention to the happenings to my immediate left. It appeared that Old Fitz had things well in hand, so when things are going according to plan, a good commander just leaves well enough alone. And that is exactly what I did. 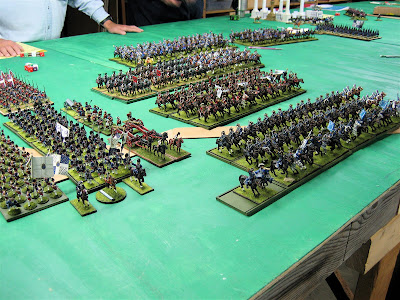 The brigade of Saxon cavalry lead the Allied advance. The grey-coated von Bruhl cheveau-legers lead the way, followed by the red-coated elite Rutowsky dragoons, and backed up by a converged 60 man unit of Austrian cuirassiers. 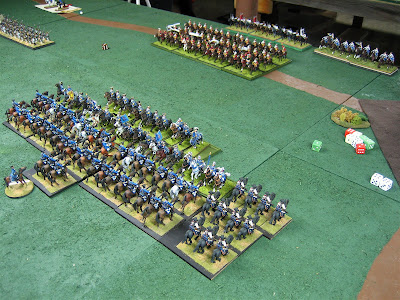 Here are the results after the first class between the Prussian DR2 Jung Krakow Dragoons (lower left) and the Saxon von Bruhl Dragoons (upper right). A single squadron of Prussain Gensdarmes joined in and hit the von Bruhl's in the flank. After the first round of melee, the Saxons took their morale check and passed. We now squared up the two sides for the second round of melee, which is why you no longer see the Gensdarmes hacking away at the flanks of the von Bruhls. Another regiment of Saxon cavalry can be seen in the background, ready to support the melee in the next round of fighting. 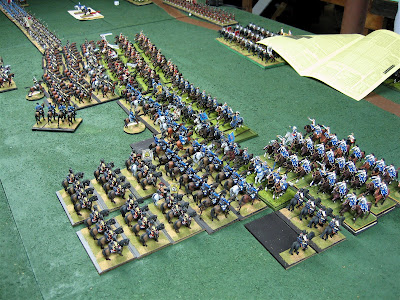 The Prussians throw in two squadrons of CR1 Buddenbrock Cuirassiers (left) to offset the arrival of the Austrian cuirassiers. At the top of the picture, the Prussian CR8 von Seydlitz cuirassiers and the Saxon Rutowsky dragoons are hacking and slashing at one another. 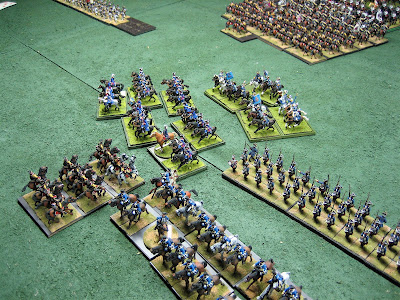 The Prussian Jung Krakow dragoons break and flee! They are closely followed by the allied cavalry which rolled a "pursuit" outcome after winning the melee. The von Seydlitz cuirassiers and the Saxon Rutowskys continue their melee in the upper left corner of the picture. Cavalry melees last up to three rounds in our BAR rules. If neither side wins, then both cavalry forces retire a full charge move to the rear where they may reorder their squadrons.


It appeared that the Prussian cavalry was gaining a slight advantage, having more armoured cuirassiers in this sector of the field. The cuirasse gives the rider a huge advantage in the saving throws, as they only die on a D6 die roll of 1 or 2, anything else is a save. The Prussians had lost the DR2 Jung Krakow dragoons and a squadron of Gensdarmes for the day, but the Saxon had lost the von Bruhl dragoons and the large 60-rider French Carabinier regiment. Enough of the allied horse were gone to allow the Prussian infantry to advance across the open field with some degree of comfort. 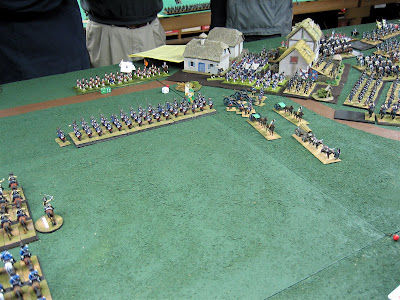 Prussian infantry advances towards the village of Leiha while their right flank is secured by Prussian cuirassiers of the CR8 von Seydlitz cuirassier regiment.