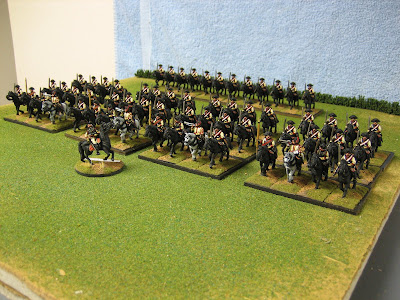 
It is now time to reveal the identity of "The Secret Unit" that I was holding back specifically for our OSW Big Battalion Game last weekend. That unit is, of course, the Prussian cuirassier regiment Number 10, known as the Gens d'armes. In last year's Big Battalion Game, the French had more cuirassiers than the Prussians and so I vowed on a stack of Bibles that I would never be out-cuirassed again. With that in mind, I order 20 packs of Crusader Miniatures' 28mm SYW Prussian cavalry figures from Old Glory in the United States and intended to have them all painted in time for this year's game.

Preparations for Historicon 2008 was taking up a lot of time over the summer, so I didn't take on this project until the first week of August. I decided that the only way to avoid demoralizing myself was to divide the figures into squadrons of 12 cavalry, so that I would work on a squadron at a time. Once one squadron was completed, I would start work on the next squadron. I was painting them at a rate of about a squadron per week, give or take some time out for other life matters. I had the first two squadrons done by the end of August, but I began to wonder if I could paint 36 more figures over the next four weeks. Somehow I was able to overcome the potential for tedium and finish the project in September. This actually gave me two extra weeks for cushion and doing other projects. 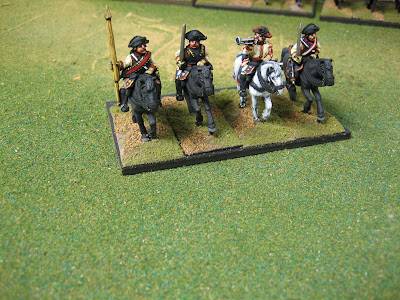 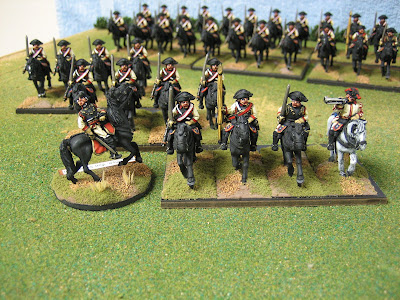 So how did the Gens d'armes do in their first game? I know that some of you are probably thinking that they suffered from the dreaded New Unit Curse and routed off the field. No, but perhaps even worse, they were not engaged in the battle of Freiberg. However, they were moving up to the front, along with the 60-figure CR8 von Seydlitz regiment and were getting ready to charge through the opening that the Prussians had created in the center of the battlefield. I guess that the moral of the story is to get your reserves on the table and get them were they can do some damage.


Now I thought that I was being rather clever, what with all of this Secret Unit talk. The French command staff spent the past several months scratching their heads trying to guess the identity of the unit. I even suggested to them that the Secret Unit might be nothing more than disinformation and that it didn't even exist. It turns out that those Perfidious Gallians had a few tricks, er, ah, secret units of their own up their sleeves. I noticed that they had a brand new battalion of Gardes Suisses on the back table and another 36-figure heavy (armoured) cavalry unit of their own. Oh well, what is a wargame without a good old fashioned arms race. I tip my tricorn to the French for responding in kind with their own secret regiments.

Unit History
The Gens d'armes were formed in 1687 as two companies of "Grands Mousquetaires", each of 65 privates from noble Huguenot families in Brandenberg. They became known as Gens d'armes in 1691 and later fought with distinction throughout the War of Spanish Succession. In 1718, they were reorganized into five squadrons. The regiment's inhaber was Colonel Dubislav von Natzmer (later Field Marshall) from its inception through 1739.

One squadron accompanied King Frederick II as his personal bodyguard during the Mollwitz campaign in 1740-41. There it was posted on the right flank and suffered along with the rest of the Prussian cavalry in that battle. It also fought at Hohenfriedberg and Soor in 1745 with greater distinction. At Soor, it charged up the Graner Koppe and captured 22 guns while losing only 68 men.

Major General von Katzler served as the regiment's inhaber (1747-1761) through most of the Seven Years War. The regiment fought at Lobositz, Prague, Rossbach, Leuthen, Zorndorf, Hochkirch, Leignitz, Torgau, Burkersdorf and Reichenbach. The regiment was typically brigaded with the Garde du Corps cuirassier regiment (CR13) during the SYW.


Command Stands
I have come up with a system of command stands that I have referred to from time to time and so I thought that I would show a picture of how it works. A general is mounted on a 2-inch diameter round stand (by himself). I glue a piece of cherry or mahogany wood onto the base and use this as an identification plaque. I then print out the name of the general (Lucida Blackletter font looks particulalry Prussian or Teutonic) and glue it onto the wooden plaque. It gives the command stand a nice finished look. Front and rear views of cavalry commander, Major General von Schonaich, are shown below. 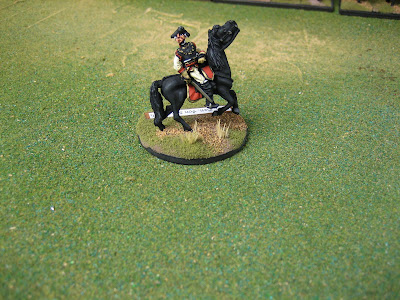 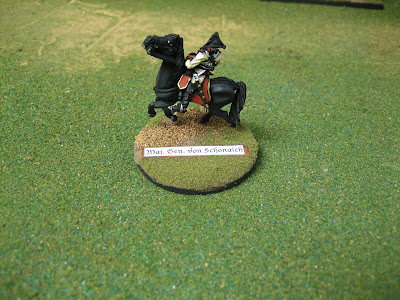