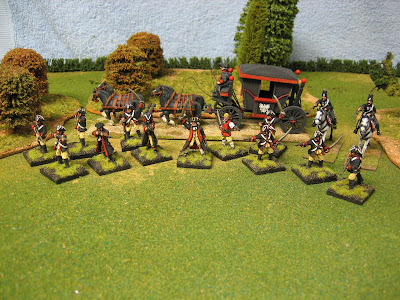 
One of the characters in my on going 18th Century campaign is the evil and cunning master spy, Milady de Winter. Many of you will recognize the name from the Three Musketeers movies, featuring Faye Dunaway as the evil antagonist. The more recent remake of the movie featured the equally delightful, but evil version played by Rebecca de Mornay. My Lady de Winter is presumably a descendant of the women who lived during the reign of Louis XIII of France and those evil genes seem to have carried forward into the 18th Century.

Milady de Winter spends much of her time in her ongoing quest to kidnap Lady Diana Pettygree, that innocent English aristocrat who galivants around the continent with the French (Gallians) at a time when Britannia and Gallia are at war. Lady Pettygree is totally oblivious to the danger that lurks just steps behind her. Countless servants, friends and acquaintances of hers seem to disappear or otherwise meet untimely ends. All courtesy of Milady de Winter and her band of henchmen.

It occurred to me that Lady de Winter would probably require a retinue of body guards to escort her as she travels around Europe on spy missions for the King of Prussia or anyone else willing to pay for her services. She's kind of like an 18th Century forerunner of SMERSH. As such, I reasoned that she would need her own band of bodyguards, all decked out in black uniforms with red facings and straw colored waistcoats and breeches. Their uniforms are modeled after those of Favrat's Freikorps Black Legion. 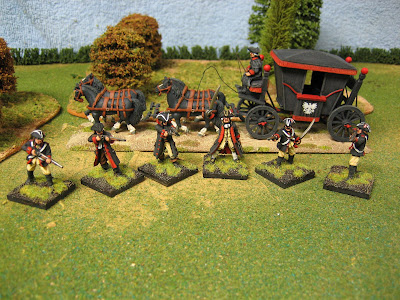 When I saw the Black Scorpion range of 18th Century Pirates and British Royal Marines, I knew that I had found the perfect figures to use to build Milady de Winter's personal retinue: the Black Legion. There are two sets of Royal Marines available - I've used Set One so far, but plan to buy more Set Two boxes of Marines with bayonets on their muskets. Some of the Marines are shown in the picture above, painted in black rather than British crimson. 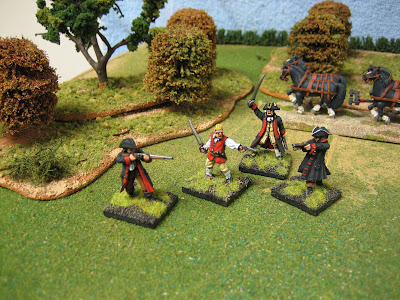 Three Privateers and the Naval Captain from Black Scorpion. The Captain will be the leader of the regulars in the Black Legion, while the gentleman in the red waistcoat and the two men in black great coats will work the dark arts behind the scenes.

The sets of Privateers in long overcoats also seemed to be perfect to play the role of the irregular naer-do-wells who do all of the dirty work for Milady. Several of the Privateers are shown in the above picture, both in long black greatcoats, one firing a carbine and the other leveling a brace of pistols at some unfortunate soul. I love these figures! They are full of character, they are easy to paint, and at 32mm, they fit right in with my Staddens, Surens and other large figures. The figures come with round plastic slotta bases. I replaced them with wood one-inch square MDF bases with precut slots that I purchased from Georgo Bases. I would imagine that Litko probably also makes one-inch square precut wood bases as well.

By the way, I want to give a shout out to Frank Hammond for teaching me how to use his method for terraining bases and applying static grass. I really like the way that these bases turned out using Frank's method. Simply put, the steps are to (1) apply spackle compound mixed with dark brown paint onto the figure base; (2) dip the wet base into a pile of railroad ballast or sand; (3) when the base is dry, apply a wash of brown ink to the base; (4) when the base dries from the ink application, then dry brush a light tan or flesh color over the surface; and finally, (5) apply blotches of white glue onto the base and dip the stand into a tub of static grass, carefully tapping off the excess static grass. You can find the details on Frank's Minden Miniatures blog, a link to which is provided on the left hand side of this page.

So far, I have painted ten Black Legion infantry and three of the Irregulars. Eventually, I would like to increas the Legion infantry to 36 figures plus a dozen Irregulars. And of course, I already have the Prussian Black Hussars (HR5) which do double duty as Milady's horse guards and as Der Alte Fritz's battle cavalry. That lot is sure to put the fear of God into the hearts of those who dare to cross paths with Milady de Winter.
Posted by Der Alte Fritz at 12:32 AM