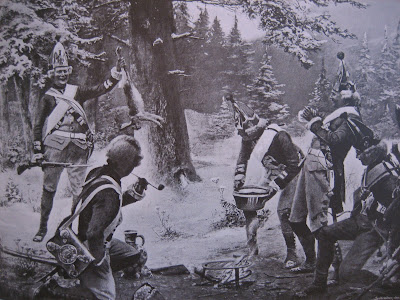 A group of Prussian grenadiers from the IR12 Alt Darmstadt Regiment enjoy a little down time for cooking, hunting and maybe a little bit of figure painting.


It is All Hallows Eve and all of the little monsters are done with their trick or treating, so things are quieting down a little bit and I have a little bit of time to paint. Except that I didn't do any painting. I couldn't quite get my painting mojo going this evening, so instead, I cleaned and primed another squadron of von Kleist horse grenadiers so that I can start painting them over the weekend. I also applied the finishing touches to the bases for 7 more of the Black Legion de Winter and 6 von Kleist dismounted horse grenadiers.

I had a decent painting output this month, consisting of the following figures:

So that results in 73 Olley Painting Points for the month of October. Not bad, considering that the first two weeks of October were devoted largely to preparation work for my Big Battalion Old School Wargame on October 11th. That was quite a big production, and well worth the effort. And then last weekend, Bill, Randy and I hosted a BAR SYW wargame at the Rock Con convention in Rockford, Illinois. So it has been an active month for me.

Now that all of the big games are over, my thoughts turn to getting units ready for the Winter skirmish game that we will play the first weekend in December, up in Brown Deer, Wisconsin. So I am busy painting freikorps and jagers and other types of figures that one does not normally see on a wargame table. I like the Foundry von Kleist horse grenadiers, which is really saying something since I am not normally a big fan of the Foundry style of figures. Somehow, though, they work for me. So I primed another squadron this evening with the hope of getting them done over the weekend. That would give me two squadrons of the eventual three or four that I plan to have in the skirmish game.

As of now, my planned von Kleist Freikorps will consist of the following: