Chalfont Holds the Prussians in Check 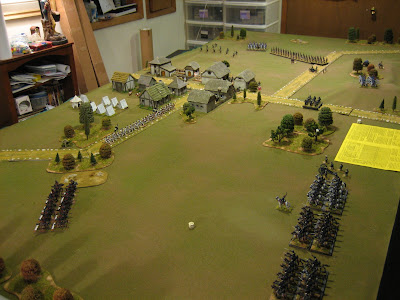 Over view of the French redeployment south of the village of Munzenberg. Regular French infantry defend the line of retreat, with the Horvath Hussars protecting their flank. Prussian hussars are seen massing south of the village, but they can not attack the infantry without supporting Prussian infantry, so they call off the attack.


Heeding the advice of the Honorable Reverend Caddy, Colonel Chalfont quickly marched the Regiment Belsunce through the town of Munzenberg and redeployed it on the south side of the town to protect his line of retreat back to Freiberg. He then converged the two companies of the Clermont-Prince light infantry with the two companies of Chasseurs de Fischer, thus forming one large battalion of light infantry. These were placed by Chalfont inside the town of Munzenberg where they were protected from the superior numbers of Prussian cavalry. Finally, Chalfont deployed the Horvath Hussars south of the town where they could protect the line of retreat AND the right flank of the Belsunce Regiment. See the picture above and click the pix to enlarge the view. 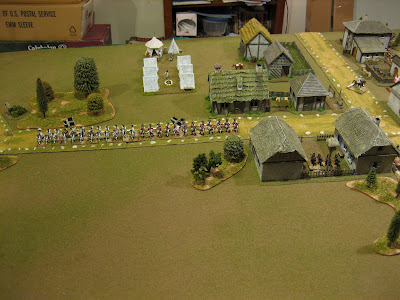 Closer view of the French Regiment Belsunce deployed in two ranks. RSM and Old Glory (24-figure units) that are pushed together to form one larger "BAR" style battalion. Colonel Chalfont can be seen inside the town, mounted on his horse, directing his troops.

Colonel Bauer countered by shifting three squadrons of Black Hussars and a section of horse artillery towards the south road. The hussars made several feint attacks towards the French infantry to see if they would break. They did not. A couple rounds of artillery fire had no effect on the French, who continued to hold their ground. Bauer deployed the Heyden Grenadier Battalion (19/25) on the plain to the north of the town and supported it with the other section of horse artillery and two squadrons of Blue Hussars. Again, Bauer hoped to bluff the French light infantry out of their positions, but when it became apparent that they would not budge, Bauer elected to call off the attack. He did not want to waste his infantry in an attack on Munzenberg village. He had no doubt that his grenadiers could carry off the attack, but for what purpose? He would have to fall back anyway, now that his cavalry screen was meeting resistance, so there was no point in accumulating needless casualties. 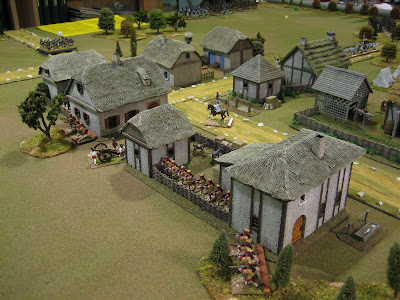 Colonel Bauer decided that an attack on the town was not in the spirit of his orders, which were to find the French screen of light forces and prevent them from detecting the approach march of the Erbprinz's army. So he pulled his forces back out of range of musketry and allowed Chalfont to march back to Freiberg, where the latter would undoubtedly report the presence of the Prussian advance guard in this sector. It thus seemed inevitable that the two great armies of Prussia (Germania) and France (Gallia) would come into conflict somewhere near Freiberg, on the morrow.

Note: We fought and concluded the epic battle of Freiberg on Saturday October 11, 1758/2008. I will post pictures on the blog tomorrow along with a full after action report. I wanted to finish the story of Colonel Bauer and Colonel Chalfont at Munzenberg before presenting the big Old School battle.
Posted by Der Alte Fritz at 4:22 PM