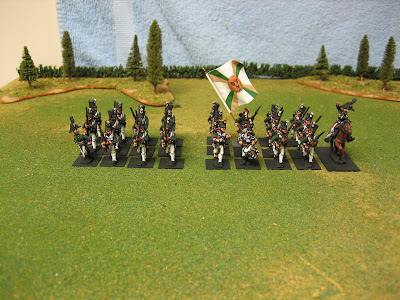 I have had bucket loads of these Old Glory 1805 Russian infantry stashed away in a box for at least ten years, gathering dust. They were sculpted by the late Dave Alsop, so they look nothing like the current range of Old Glory figures. Alsop also designed the limited edition range of 1805 (bicorn) and 1809 (shako) French infantry, a limited range of 1805 Austrian infantry, and his rather extensive American Civil War range (which is one of my favorite ranges of all time for any historical period - exquisite sculpts they were).

Alsop never got around to making the necessary command figures, so back in 1994 (or so) I asked Old Glory to cast me approximately 900 of the Russian figures. I had intended to use the figures to build up a Russian army at Austerlitz, with the goal of conducting a re-enactment of the battle on the 200th anniversary of the battle in 2005. I came very close to completing this project - the French were completed and the Russians were only missing some of the cavalry. I was going to borrow Austrian figures from other gamers. However, Fate had different plans for me and the project got derailed (you know, marriage, kids a new job, etc). Mind you, I rather like the path that I took in life, but it didn't include completing the Austerlitz Project.

Those figures have all been sold off and I start anew with virtually no Napoleonics in my collection these days. So I am starting over at a 1 to 10 ratio of castings to real men in 28mm and my intention is to develop a rules system based on Bill Protz's Batailles de l'Ancien Regime ("BAR"). The initial pair of armies will be the French in bicorns and the 1806 Prussians. I figure that the Russians will dovetail nicely with the Prussians, under the assumption that the remnants of the Prussian army retreated into East Prussia and linked up with the Russians. On the otherhand, if the Russians really take off in my collection, then I can do some 1805 battles as well. I don't know if I will ever paint the 1805 Austrians though. 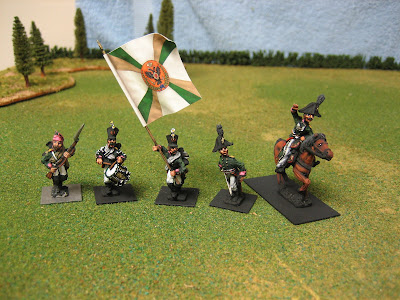 Elite Miniatures command figures that I am using with my Alsop Russians.

I am using George Nafziger's book, The Imperial Russian Army (1763-1815) volume I, as my guide for the organization of my 1805 Russian army. The Russian army underwent an endless series of reorganizations, and the one that is applicable to the Austerlitz army occurred in 1802. Grenadier regiments (of which there were 13) consisted of one grenadier battalion and two fusilier battalions. These units wore a SYW Prussian inspired mitre (tall for the grenadiers and a short mitre for the fusiliers). 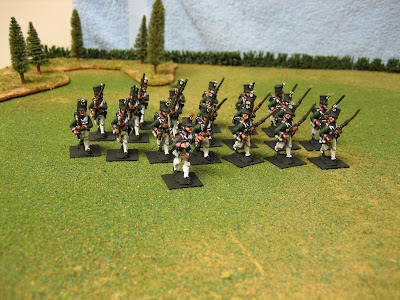 Old Glory only, without the command figures.

My initial thought is to paint all three battalions in each musketeer regiment and then add a jager battalion or an "orphan battalion" of musketeers from another regiment in order to give each player four battalions to command. Eventually, this might be enlarged to a brigade of two regiments, or six battalions in total. Barclay de Tolly, Minister of War, wrote to the Czar that the proponderance of grenadiers in the musketeer regiments had diluted their quality and that they were not as elite as one might imagine. He clearly stated that there was nothing elite about them.

So borrowing from a suggestion from one of the lads on The Miniatures Page (TMP), I am thinking that the grenadiers in the musketeer regiments (are you following this so far?) will wear the shako and busch plume and have a troop quality that is no better than a musketeer. For the designated grenadier regiments I will kit them out in the older mitre cap and they will be elite. The mitres will easily identify them as real grenadiers. 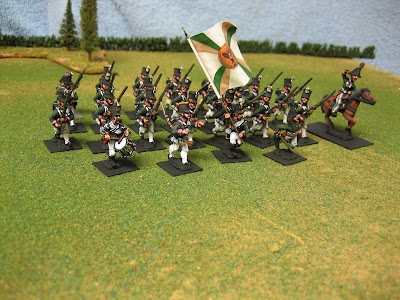 A closer view of the Alsop Russians. Note the NCO pointing, the only command figure in this range. Alas, the figures are no longer available.

Wouldn't you know it that all of the close up pictures of the Old Glory figures that I shot last night turned out blurry, while the close ups of the Elite figures were nearly perfect? The Elite figures are very nice, much better than his 1806 Prussian range. The anatomical proportions are very good and human looking, so Fritz likes them a whole lot. The Elite command figures seem to fit in well with the Alsop Old Glory figures.

I really like the Old Glory Russians and enjoyed painting them over the past week. I have 24 figures in the Smolensk regiment so far, and plan to increase this unit up to 60 figures. All of my flags will be from the exquisite GMB Designs range.

As for my painting points total in May, I finished up with 129 Olley Painting Points (1 point for each infantry and cannon casting, 2 points for each mounted figure with horse). The tally includes 24 SYW Prussian dragoons, 1 SYW Hussar, 2 Napoleonic chasseurs a cheval, 1 Russian mounted colonel, for a total of 28 mounted figures or 56 points. On the infantry side, I painted 19 Napoleonic Highlanders, 30 Atholl Jacobites and the 24 1805 Russians for a total of 73 points.
Posted by Der Alte Fritz at 11:49 AM