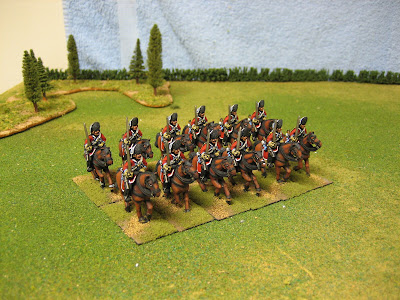 
Here is a picture of a squadron of Austrian horse grenadiers that I completed a few weeks ago. The figures are from the Crusader range of Seven Years War figures and they are a joy to paint.

The Austrian dragoon regiments all had a company of elites that wore the bearskin mitre, hence the name Horse Grenadiers. In the cuirassier regiments, the elite company was called a carabinier company. The carbiniers did not wear the traditional cavalry boot, but instead wore something that looks like a leather gaitor with buttons running up the side. Presumably, this would allow the carabiniers to dismount and fight or patrol on foot. By the way, nobody makes carabiniers for the Austrian cavalry.

The Austrians had the habit of detaching all of the elite companies from the dragoon and cuirassier regiments and converging them into ad hoc cavalry regiments prior to a battle. They were usually held in a central reserve and used to counteract any Prussian break throughs in the battle line. Thus, in my horse grenadier unit, I have three 12 figure squadrons from three different dragoon regiments - green coats, blue coats and red coats. It makes for a nice looking converged unit.

I believe that the red coated regiment depicted above is the Saxe-Gotha dragoon regiment with red coat and light blue facings. I use the term "believe" because it is one o'clock in the morning and I need to haul off to bed and couldn't remember for sure the exact unit. The red coats are painted with Reaper's "Blood Red" in two coats over black primer. Then the red is highlighted with Ral Partha "Red". The combination does an effective job of covering up the black primer, which is a significant concern when one is painting reds over black.

I was working on another squadron of Austrian Dragoons over the weekend: the green coated, red facing De Ligne Regiment (DR31) who are famous for their charge at Kolin that saved the day for the Austrians. I already have 36 figures in the regiment, but I am adding another 12 figure squadron in time for my Historicon game in several weeks. I kind of hit the painting wall on Saturday, so I switched over to 1805 Russian horse artillery from Elite Miniatures. Russians seem to paint up so much faster for some reason so I find the allure of painting Russians hard to resist these days. I also primed more of the Old Glory 1805 Russians in bicorn that are depicted in yesterday's post.
Posted by Der Alte Fritz at 12:50 AM