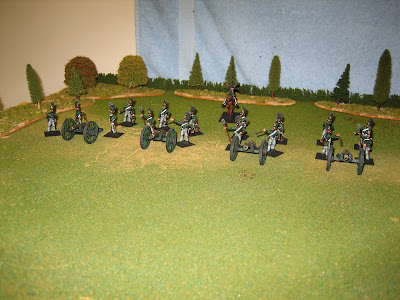 
I have been working on a battery of Russian horse artillery for my growing Russian 1805-07 army. You can see the results above of the first four of six guns that will be in the battery. My recollection is that foot batteries had 12 guns as did the horse batteries had 6. Sometimes the Russians would divide their artillery into "half batteries" of 6 field guns. The horse artillery battery had 6 six pounders and 6 howitzers, called licornes, and were manned by a company of 160 men. So at a ratio of 1 to 10 (castings to real people), that would work out to 16 figures in a battery. Assuming one uses four gunners per gun model, then we would need 4 gun models in this scale.

In the example above, I have painted 3 six-pounders and one licorne howitzer. I am contemplating increasing the battery to 6 gun models. The rules In The Grand Manner by the late Peter Gilder used a ratio of 2 gun models for each actual cannon in the battery. ITGM uses a 1 to 20 ratio, so one might imagine that one would want to use more gun models at 1 to 10. I am not so sure. Do I go with the correct ratio of personnel and then divide that number by four (assuming that four is the minimum number of castings that can serve a gun model), or should I go with something more arbitrary like Gilder and ITGM does? I am still trying to resolve this issue. I do sort of like the idea of 6 gun batteries.

The display above, takes up a frontage of 18" spaced out in the arbitrary manner in which I set up the photo shot. That begins to give you some idea as to how much ground space a Napoleonic artillery battery takes up. I plan to add limbers at a later date. I believe that Hinchcliffe makes Russian limbers. Nobody else seems to do so (maybe Eagle-Bicorne?). 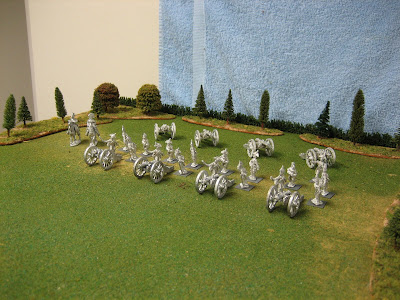 French 8-pounder battery - unpainted Elite Miniatures, with 12-pounders in the back ground.


I have been neglecting the French of late, so yesterday I started cleaning and assembling an 8 pounder battery. The French usually used 6 eight-pounders and 2 six-inch howitzers in a typical foot battery that would have been attached to an infantry division. The heavier 12-pound batteries were usually attached to the infantry corps and held back in reserve. The figures shown in the picture above depict Connoisseur 8-pounders and Elite 12-pounders along with some Elite Miniatures artillery crew in bicorn, as worn in the 1805-07 campaigns.

The above picture also sort of serves to illustrate one of the advantages of single based figures in wargaming. In the background, you can see French 12 pounders: the Emperor's Beautiful Daughers, as he liked to call them. The 8 pounders are in the foreground. By the simple expedient of changing the gun models, I can use the crew as a medium 8 pound battery or as a heavy 12 pound battery. I rather like the flexibility that the system gives me in organizing my armies.
Posted by Der Alte Fritz at 4:48 PM