That ITGM Napoleonic game of two weeks ago has had lingering effects on my painting output this past week. I am still basking in the after glow of a great wargame and thoughts of shakos and squares are filling my head. It makes me want to go back to my 1806 Project. So I hauled out some Elite Miniatures French chasseurs a cheval and primed up a couple dozen of those. Then I dabbled with them a bit, painting one elite company trooper in colpack and one regular company trooper in shako. They looked good, but I couldn't motivate myself to paint anymore of them. 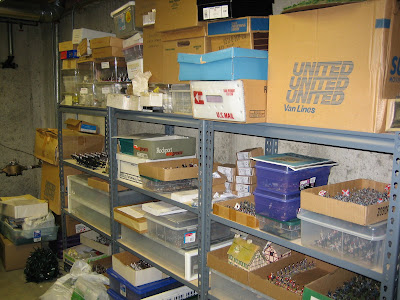 The infamous Closet O' Lead. What wonders lie deep within?

So then I moved the chasseurs off to the side and went to work on some of my Potsdam Miniatures SYW Prussian infantry. I plan to add another battalion of musketeers - IR18 Prinz von Preussen regiment (rose colored facings). I went through the grunt work of blocking in the basic colors of dark flesh, dark blue and light grey, but the drudgery of all of this made me lose interest in painting any more SYW figures for awhile. So what should I do?
I happened upon a rather large and heavy box of lead that has been stashed away in the national archives of Hesse Seewald (think back to the end of "Indiana Jones in Raiders of the Lost Ark" when the government is taking the ark of the covenant off into the depths of some warehouse. Buried deep in the closet o' lead, I found this box of Dave Alsop sculpted 1805-07 Russian infantry (that he had made for Old Glory before his untimely passing away). These are nice figures so I thought that I would prime a couple up and see how they look. The initial results are encouraging and I think that I might be motivated to paint a 60 figure battalion for my (now) 1807 Project.

Updating this entry, I have now completed six of the Old Glory Russians and I like them enough to take a crack at painting a battalion of 60 figures. I am using Elite Miniatures drummers, standard bearers and officers since Alsop never finished the range by adding the command figures. This solution should work out nicely. The first battalion will be the Smolensk Regiment with rose (pink) collar and cuffs and yellow shoulder straps ( I will post some pictures over the weekend) and then the unit will be finished off with a nice GMB Designs flag.

I have enough of the original Alsop figures to build nearly 16 battalions of 60 figures. I doubt that the army will get that large, but it is nice knowing that I already have the necessary figures for this project, even in an expanded version, without having to invest a large sum of money in new figures. Artillery and cavalry figures will come from the Elite Miniatures range of Napoleonic figures.