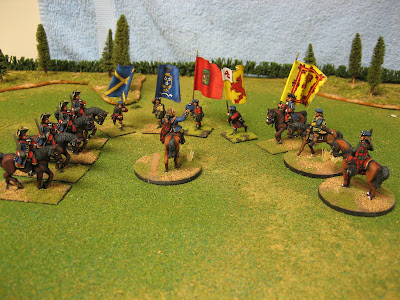 Prince Charles greets his victorious troops after the battle.


This afternoon, we played a refight of the battle of Prestonpans (Sept. 21, 1745) using our Batailles de l'Ancien Regime ("BAR") rules, with some minor modifications for the Jacobite Rebellion. It was an extraordinarily fast paced game, covering four turns in about two hours, making this a fun scenario for an evening's game down at the wargame club. Both sides had approximately 220 figures with each side divided into two brigades. Randy Frye (Earl of Talisker) and I (Lord George Murray) commanded the Jacobite forces for the Prince, while Bill Protz handled the two Hanoverian brigades on the other side of the table. 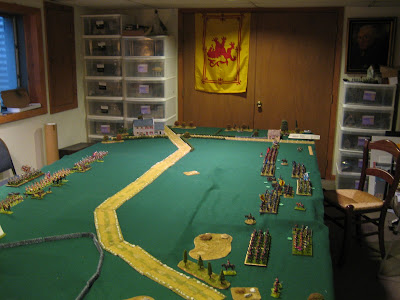 The opening deployment at the start of the game. The Earl of Talisker's brigade was deployed on the Jacobite left (bottom of the picture), while Lord George Murray held down the right flank.


The Hanoverian general Sir John Cope was allowed a 12-inch set on from his table edge which placed him just behind the crest of the Prestonpans Moor. He elected not to defend the walled enclosure on his right (Jacobite left). The Jacobites had no particular plan other than to advance as quickly as possible onto the Moor and engage the redcoats in melee. 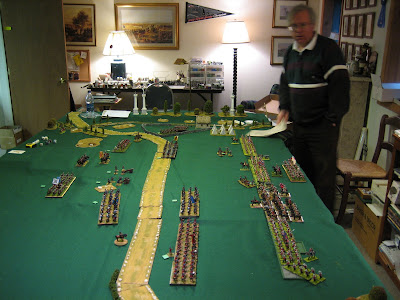 Turn One: Murray's brigade of Highlanders quickly gain the high ground, while Cope counters by advancing his cavalry brigade in the center.

The normal movement in this game was reduced from 18 inches to 15 inches, but the Jacobites were allowed to toss a D6 for up to six extra inches of movement. I kind of liked the way this worked. Murray was able to hustle his brigade of Stewart of Appin, Frasers and the Camerons to the crest of the hill on the first turn. A small troop of light horse probed around to his right, and you can see that the British 60th Foot is bending back a platoon to protect its flank, above. The Government artillery opened up on the Stewarts, but the cannon balls bounded over their heads to no effect (both sides had Poor rated artillery which has a -1 shooting modifier, plus we only used 3-pdr guns). General Cope moved up his cavalry brigade so that they would be in position to charge on turn 2 and disrupt the Jacobite advance (a good tactical idea). 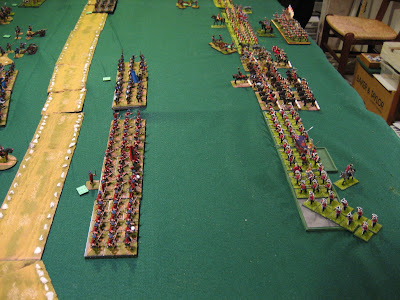 Turn 2: Camerons refuse to advance, so they get into a firefight with the 60th Foot. British dragoons can be seen advancing on towards the Appin Stewarts in the center.

The troops rated Poor are required to pass a morale test before they may advance within 10" of the enemy. So for the next two turns, the Jacobite attack on the right ground to a halt as the huge Cameron regiment (45 figures) refused to advance into the 60th Foot. Meanwhile, Brigadier General Mosteyn (British cavalry commander) launched his three squadrons against the Appin Stewarts (to the left of the Camerons). The Stewarts lost there nerve and fell back 6" rather than stand their ground and fire at the 10th Dragoons. The 6th and 11th Dragoons likewise decided not to join in on the cavalry charge initiated by the 10th Dragoons. Thus, the Stewarts were able to fall back in good order without being pursued. Still, things were looking bleak for the Stuart cause, from Lord George Murray's point of view on the right.

On the Jacobite left, the Earl of Talisker's brigade of three MacDonnell and MacDonald regiments advanced across the moor and captured the walled enclosure that could have anchored the Government right flank. 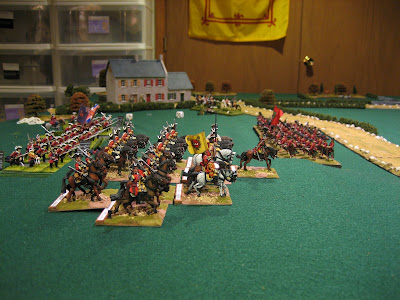 Turn 3: Government Cavalry charge into the Stewarts and Frasers of Murray's brigade on the right.

The Government dragoons closed into the Frasers, who lost their nerve and routed to the rear. The Camerons still refused to charge into the 60th Foot, and the Stewarts were looking a bit shaky as well. Gloom and despair for the Jacobites. If the right wing collapsed, then the only unit remaining was the Royal Ecossais (French regulars - 30 figures rated Trained). In the center of the field, the MacDonnell of Glengarry regiment was cut down by half from the opening volley of the 44th and 46th Foot. On the left, Talisker continued to move his Clanranald of MacDonald through the enclosure. Next to them, a mercenary Colonel von Bergmann, from Tradgardland, led the MacDonnell of Keppoch regiment towards the 44th Foot. 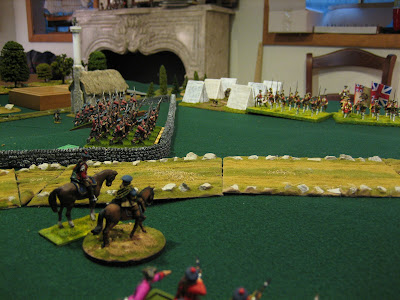 The Earl of Talisker (mounted -right) looks on as the Clanranald of MacDonald regiment captures the enclosure on the Jacobite left. At the bottom of the picture, we can make out the pink coated uniform jacket of Colonel von Bergmann of Tradgardland as he directs the Keppoch regiment forward. 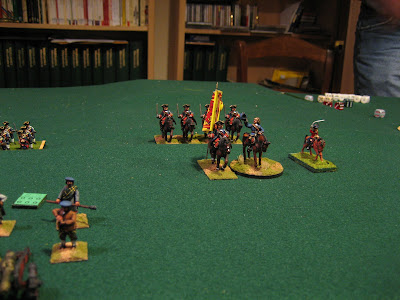 Prince Charles and his bodyguard troop of Lifeguards direct the battle from the center. He urges Murray to rally his troops and keep his head on his shoulders. 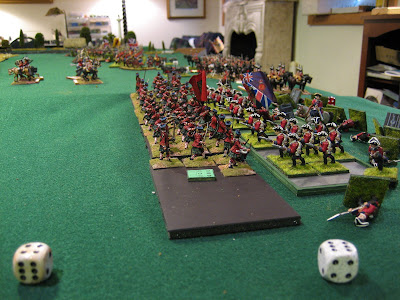 The Camerons finally charge! And crush the 60th Foot.

At the start of Turn 4, Dame Fortune began to smile upon the Stuart cause as first Murray was able to rally the Frasers (and just barely, by one pip of the dice) and then the Camerons finally decided to charge. The Camerons slaughtered the 60th Foot in the melee, causing the latter to run off the table. The Camerons rolled very well for the D6 melee bonus, rolling a "6", while the 60th was rolling snake eyes and deuces. Bless you God. 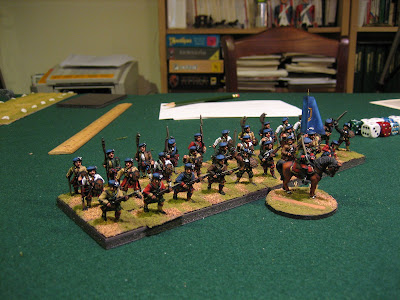 Both events were actually the result of a mid-game rules adjustment by the Good Mister Protz, who decreed that the Jacobites should henceforth receive a +1 morale bonus if they were attempting to charge. Without this change, the Camerons would still have been cemented to the auld sod. Another Protzian decree decided that Lord George Murray had a bit of charisma afterall, and that he would add a +1 on any morale roll of any Jacobite unit under his command. Without this ruling, the Frasers would have run off the table for good, without losing a single man. 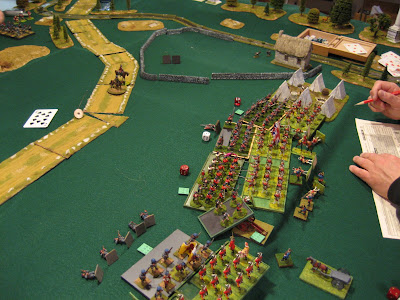 Turn 4 Jacobite Left: Talisker's brigade pitches into the 44th and 46th Foot regiments and drives both off the field.

Things were really heating up on the Jacobite left wing, as Talisker charged all three of his regiments into the waiting Government infantry. The Clanranald and Keppoch regiments combined against the 44th Foot (shown at the top of the picture above), while the remnants of the Glengarry regiment (shown at the bottom, with yellow flag and rampant lion) bravely made a forlorn hope charge into the 46th regiment of foot. They had no chance, given that they were severely outnumbered. Or did they?

Fate was a fickel lady this afternoon, for last 9 figures from the Glengarry regiment charged into 30 figures of the 46th Foot and guess what? They won the melee and the 46th routed, breaking through the 27th Foot standing in the second line as a reserve. The 27th became disordered and then they routed too. How did that happen? Wow. 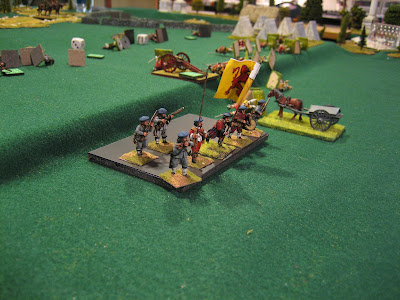 But things were even better to the left of the Glengarry regiment, for Colonel von Bergmann led his Keppoch lads into the 44th Foot, where he personally captured both regimental colours in the hand to hand fighting. The 44th also routed off the table. 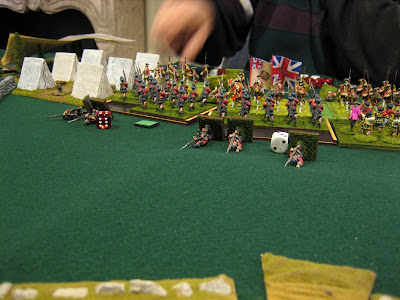 Von Bergmann (pink coat) leads the MacDonnells of Keppoch to victory on the Jacobite left, albeit with some significant help from Clanranald regiment to their left (in the camp).

Meanwhile, back on the right-center, the Government cavalry had decided that they had enough and they fled en masse from the field, save for a reserve squadron of the 15th Dragoons. Lord George Murray scanned the field and realized that the only formed troops left were all Jacobites. 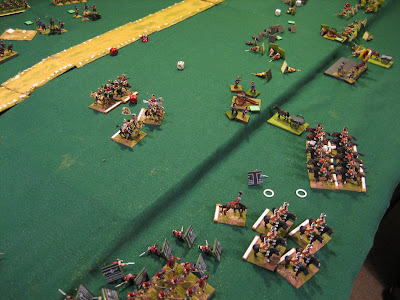 The last of the Government cavalry flees, except for the 15th Dragoons formed as a rear guard. The Camerons (bottom) look on.

At the end of Turn 4, there was no formed Government opposition remaining on the field. It was a total and utter rout of Johny Cope's army. Since Edinburgh was already occupped by the Jacobites, General Cope had to ride all the way to Berwick to deliver the bad news to the Hanoverian government. Prince Charles rode around the battlefield to the cheers of his men as the battle concluded. 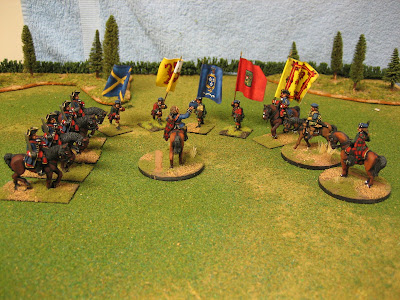 To the victors go the cheers. Prince Charles thanks his troops for their hard fought win.

So the game was over at the end of Turn 4, all in about 2 hours. The rules modifications that we made seemed to work well and it was quite evident that the best strategy for the Jacobites was to get across the field as soon as possible and close in for the melee. I liked the idea of Poor troops fighting one another and having to pass a morale roll to close. My Camerons wouldn't budge and I was sure that the Frasers would run off the table without losing a single figure. But a mid game act of god saved Murray's bacon today. The rules changes that we made (+1 morale bonus when charging) made sense and made for a better game.

In our next campaign game, the Jacobites will receive another battalion of French reinforcements (Albany Regiment and the Fitzjames Horse) plus some more Highland and Lowland units. The new Scots regiments will probably start as Poor, while the regiments that partcipated in this game will be upgraded to Trained. The Government forces will have more Trained regiments in the next battle as well, so the Jacobites will have a tougher nut to crack. I really enjoyed this game and the rules were spot on for the period. Additionally, we have some growing legends with von Bergmann's and the Earl of Talisker's exploits. Likewise, one wonders what shall become of the Camerons? Will they charge the next time or stand fast? Such questions can only be answered on the table top , aided by the luck of the dice.