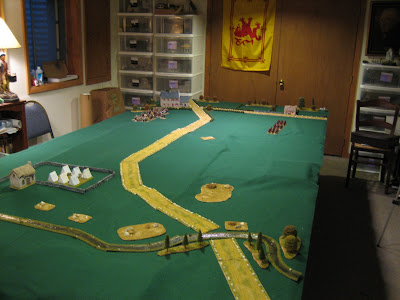 
The plaid painting blitz of the last three weeks has come to an end and now it is time to let the metal lads settle the issue of the Jacobite restoration on the field of battle. It is hard to believe, but I have assembled a force of 63 infantry, 6 cavalry and 4 artillery crew plus two senior mounted officers. We will fight the first battle of the campaign tomorrow, using a scenario that is loosely based on the battle of Prestonpans.

I have set up the game table, as shown above, and you can see that the terrain is fairly open. The picture doesn't show the rise in the terrain in the middle of the table, but this is where the Government forces will deploy. The terrain is rather stark and Old School, but we are here to play test the rules for the Forty Five and I did not want to clutter the field with obstacles and impediments. Hence the simplified terrain.

I am considering having the Jacobites dice to see where they enter the table; either that, or allow them to deploy after the Government troops are set up. This represents the Jacobites' greater maneuverability as they marched around the redcoat flank several times, seeking a more favorable starting position for their eventual attack.

There is, of course, no Earl of Talisker. This is a fictional character that I have made up for our Jacobite campaign. He is a laird from the Isle of Skye, home of the whiskey that bears his family name. Likewise, some of the units such as the Prince's Lifeguard (Lord Elco's) and the Royal Ecossais were not at Prestonpans, but we are using them in our stylized version of the battle. Afterall, if I am going to take the time to paint them, then you can be sure that they are going to show up for the battle. The two MacDonnell regiments are actually ECW Scots infantry being pressed into service, while the kilted Black Watch is standing in for the Camerons and the Clanranald regiment. The Royal Ecossais are actually some blue coated American provincials with Royal Ecossais standard bearers painted just for this game. Eventually, we expect to have the actual forces painted for future games.

I don't believe that any of the Government regiments in our OB were actually at the real battle. They just happen to be the British redcoat regiments that we have available for the game.

We are using some minor tweaks to our standard Batailles de l'Ancien Regime ("BAR") rules. The Jacobites will roll a D6 before each melee and the die roll pips determine the amount of modifiers to the melee bonuses. So I hope that I roll a lot of sixes. Since virtually every unit is rated poor, units on both sides will have to test morale whenever an enemy closes within ten inches of them. That could prove interesting if two opponents meet and both elect to run away! We will also use limited small arms ammo chits for the Jacobites in order to encourage them to go in with the sword rather than engaging in a fire fight with the Government troops.

The other interesting thing about this game is that all of the units will be either 30 or 45 figures, rather than our standard 60 figure regiments. This will provide more maneuvering room on my 6 by 12 feet table and probably have some unforeseen effects on the fire dyamics.

This should be interesting and I'm looking forward to the game.
Posted by Der Alte Fritz at 7:13 PM