Picture of the Week: Leuthen Churchyard 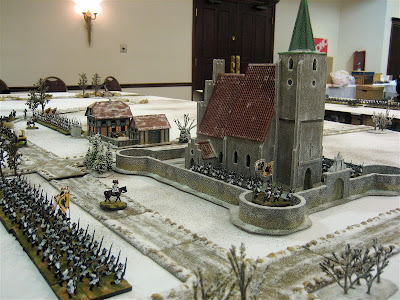 Here is a picture of one of my favorite pieces of war gaming terrain in my collection. It is a model of the Leuthen Church in the Winter. Herb Gundt made the church and buildings, complete with snow on the roofs, as well as all of the roads and trees that you see in the picture.

The picture was snapped at the Seven Years War Association Convention, circa 2007.

The buildings were designed with lift off roofs to allow for skirmish gaming. As a matter of fact, my thought when I commissioned this terrain was to run a skirmish level attack of the Prussian Guards on the churchyard, defended by the Rot Wurzburg regiment.

Here is another view of the church and the surrounding buildings in winter mufti: 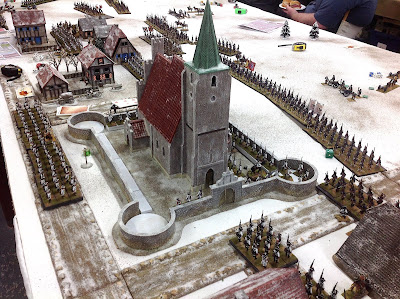 In the above picture you can see some of the firing steps that Herb made so that figures could stand at the walls and be able to look over the top. Most of the Austrian figures are from Crusader Miniatures while the Prussians are a mix of Stadden, Suren, Elite Miniatures, and Crusader Miniatures.