Here are a few more of the pictures that I have taken of my growing WAS Project Austrian and Prussian battalions.

I posted the above picture on my previous blog post, but I like this photo because it shows nearly all of the units that I have painted in the WAS Project. There are seven Austrian line musketeer battalions so far that vary in strength from 32 to 40 figures. The first two units that I painted used standard Austrian yellow regimental and white colonel's flags that were used during the SYW. I believe (someone can check me out on this one) that the yellow flags started to filter into use around 1745, that is, towards the end of the War of the Austrian Succession ("WAS").

The earlier WAS flags have several varieties of flags. I like the red and white horizontal striped flag that you can see on the regiment in the lower righthand side of the picture. Several other flags have red and white rectangular shapes around the edges of the flag, compared to the more common "flames" pattern.

I have been buying my WAS flags from a company called "Pete's Flags", which he sells only on eBay. These are every bit as good as GMB Designs flags and they are available for both 28mm and 15mm armies.

I haven't given this village a name yet, so maybe my readers can leave some suggestions (keep them family-oriented please LOL) for the name.

This village consists of three Ian Weekley buildings that were made circa 1986; one early Herb Gundt house (lower left corner of the first picture) and a blacksmith shop made by Ed Phillips. The cobbled town square is a mat from Lemak, a company that makes little Christmas village buildings and accessories. I bought the cobblestone mats from Michaels' Stores in the United States. I plan on eventually giving the mat a black wash to make the cobblestones more visible. I could dry brush some light colors over the stones, but I'm not sure how well the paint would adhere to a rubbery, unprimed surface that bends. The fountain in the center was also made by Herb Gundt. He used an old ECW Minifig for the statue therein. 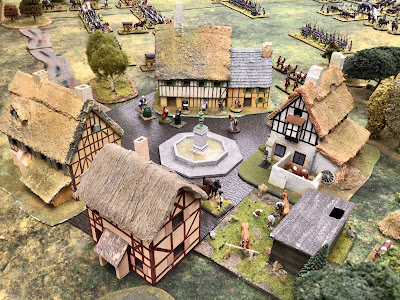 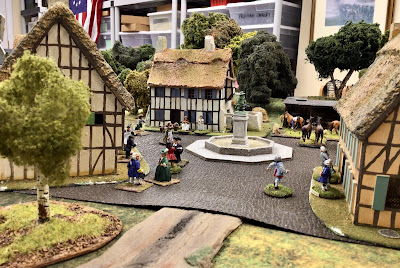 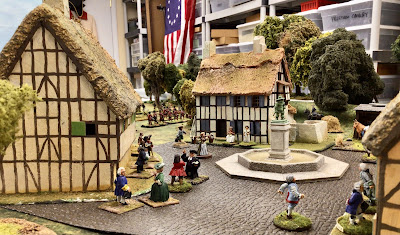 Next we have a couple photos of Jung Fritzenburg. I already have a larger Alt Fritzenburg so I used a similar name for this collection of Ian Weekley buildings and Herb Gundt church. The church roof lifts off and I oftentimes place battery powered tiny white lights inside.

In the pictures below, we see the village center with several Ian Weekley buildings and the Herb Gundt church. Some Minden mounted ladies and gentlemen are riding through the village accompanying a four horse carriage (made by Ed Phillips). Facing the camera is the infamous Savage Swann Inn. A number of the locals have gathered in front of the Savage Swann to imbibe the local pilsner beer. It's a bit early in the day for them to be swilling beer, but who am I to judge?

The village is populated by civilians from a variety of figure ranges including Minden, Foundry, Front Rank, Perry and Blue Moon. 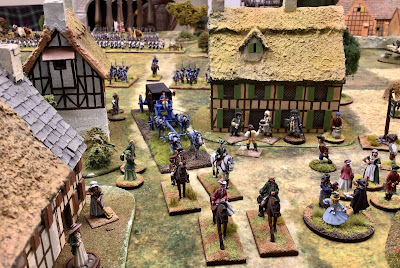 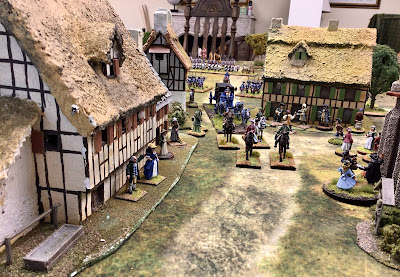 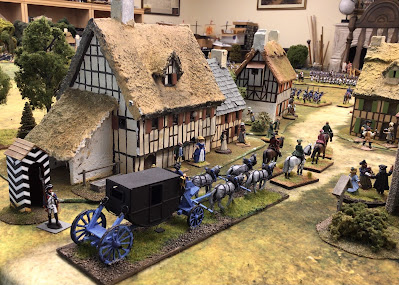 That's Jung Fritzenburg. It is a peaceful village for now, but things will heat up soon as the Prussians and Austrians have both set up camps outside of the town. A battle is sure to follow.