For a long time I have been toying with the idea of painting a wargame cavalry regiment of the Prussian Bayreuth Dragoons (IR5) dressed in white coats. Yes, Prussian dragoons wore white coats at the start of the 1st Silesian War. I already have the Bayreuth Dragoons in my Prussian army, but now that I have embarked on a War of the Austrian Succession ("WAS") I thought that now is the time to paint them wearing white coats rather than light blue coats.

I painted a couple of test figures to see how they will look. I also used some of the galloping/cantering horses from the Fife and Drum AWI figure range so as to give the unit a more active pose.

Here are some pictures of the test figures: 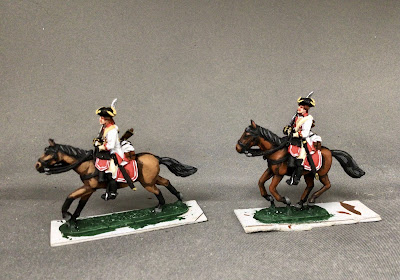 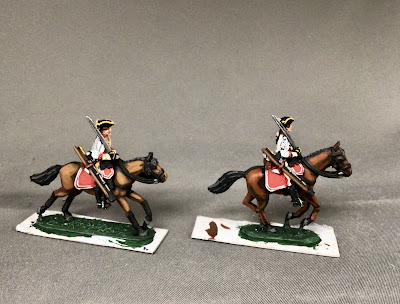 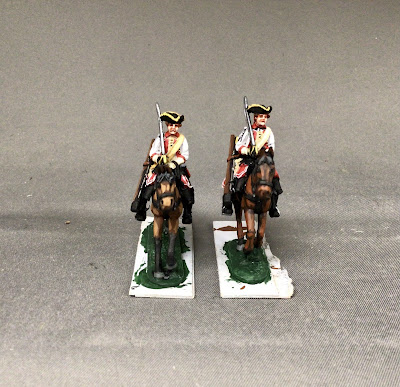 I like the look of these figures with white coats and so I think that I will paint a 36-figure regiment of them with Prussian Dragoons from the Minden Miniatures (what else?) figure range.

I cleaned up and assembled 36 figures this afternoon and the first 12 have been primed, so that I can start painting tomorrow. My cavalry figures all get a few swipes of a rat-tail file between the legs and then I rough up the surface on the horse where horse and casting will be glued together. Before applying glue, I roll out some Green Stuff epoxy putty and place a little piece on the underside of the rider casting. Then glue is applied between the legs of the cavalry figure and the two halves are smooshed together. The putty fills in any gaps between the figures while also making for a better bond.

I should have the first 12 figures painted and based later this week and I will post pictures on this blog.