Going Down To The Crossroads

I’m feeling quite a bit better today so I went down into the Man Cave and set up a couple of photo shoots to pass the time away. Today’s fox is the meeting of some AWI Continental infantry meeting at a village crossroads as they march off to battle.

Major General Nathaniel Greene has a rendezvous with a couple of his brigade commanders in front of The Savage Swann Tavern. The proprietor of the Inn, a Mr. Donovan, is offering cold refreshments to the gentlemen.

A brigade of Continentals can be seen marching off into the horizon. The soldiers are all from the Fife and Drum Miniatures range of figures. The civilians are from a wide variety of companies including Minden, Perry, Front Rank, Old Glory and a few unknown figures that I have picked up over the years.

I hope that you enjoy the pictures. 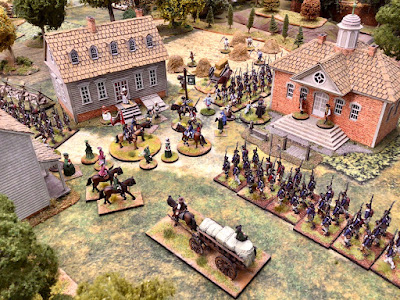 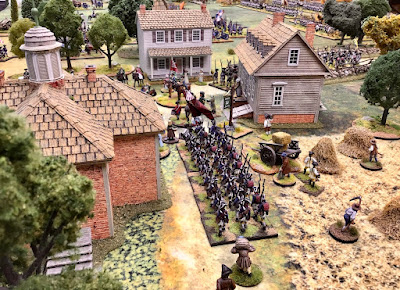 The buildings in these snapshots were made by The Master Himself, Herb Gundt. The table mat is from Cigar Box Battle Mats. The haystacks (aren’t they really nice and realistic) were made by a fellow who I only know as “Rick” who shows up at the Seven Years War Convention every year with his scratch built terrain pieces.

I dropped my photo lamps onto the floor prior to the photo session so I had to rely on the overhead lighting in the Man Cave, augmented by the photo editing that is available in iPhotos. The lamps are broken from the fall so I will have to purchase a new set.

Whenever I do a shoot and examine my pictures, I notice little things that weren’t hidden from the camera lens, be it a stray group of figures that I’ve set aside to get them out of the shot, or troops from a different era that are sitting on another area of the table. When I’m composing a shot, rather than just taking a shot of a game in progress, I “wall off” the intended area of the photo with a forest of trees 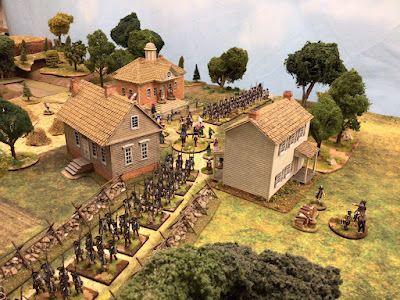 There will probably be a few more photo sessions over the next week or so and I will see if I can weed out the mistakes and improve the lighting a bit.
Posted by Der Alte Fritz at 2:32 PM