I have been busy painting samples of all of the new Minden Miniatures SYW figures that were recently added to the range. Today I present pictures of the Russian Horse Grenadiers. The new product codes for the figures are as follows:

Information about the organization and formation of the Russian Horse Grenadiers can be found on the ever-reliable Kronoskaf web site:

Kronoskaf notes that the horse grenadier regiments had two 3-pound cannon that were served by men from the Russian artillery, but usually fielded one cannon on campaign.

In late 1758 (sometime after the battle of Kunersdorf) the horse grenadiers replaced their helmets for tricorn hats, thus resembling Russian dragoons save for the color of the horse furniture -- fawn yellow or buff for horse grenadiers and blue for dragoon regiments

The first picture, below, shows the command pack for the horse grenadiers. The officers and musicians in the regiment always wore their regulation cornflower blue coats, in Summer as well as the rest of the year. The rank and file horse grenadiers would shed their blue coats during the Summer campaign season and wear the long-sleeved waistcoat.

The next picture depicts the standard horse grenadier uniform with the cornflower blue coat. There are three figures with horses in the pack (despite there being only one figure in the picture - I haven't painted the others yet, but will soon). The product code for these figures is MRC-007. 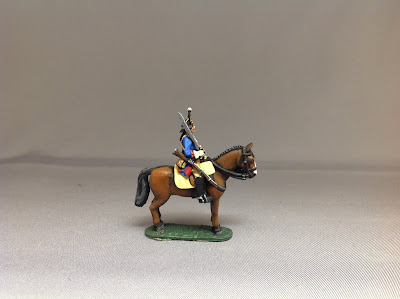 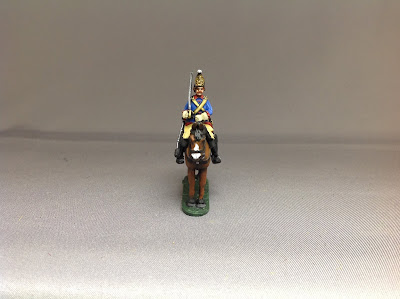 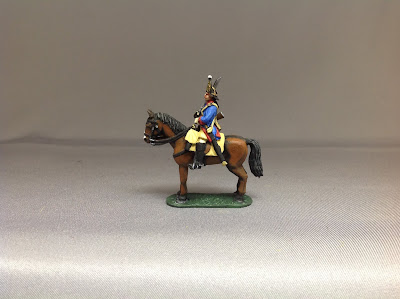 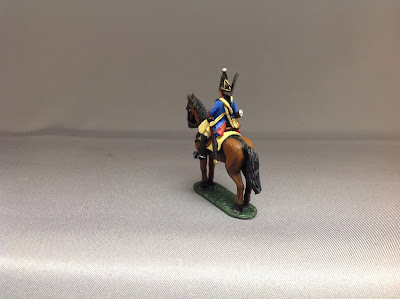 The third pack of Russian Horse Grenadiers (MRC-008) contains three rank and file horse grenadiers wearing just their long sleeved waistcoats. The waistcoats were a buff color and were adorned with blue collars and blue cuffs. The waistcoat opened down the center and was secured by eye-hooks rather than buttons. 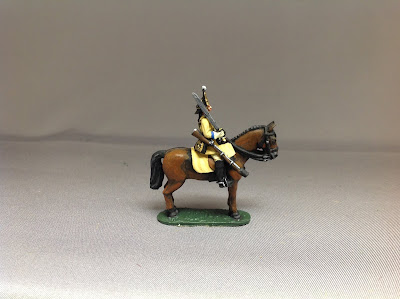 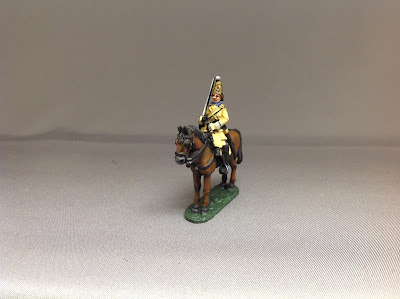 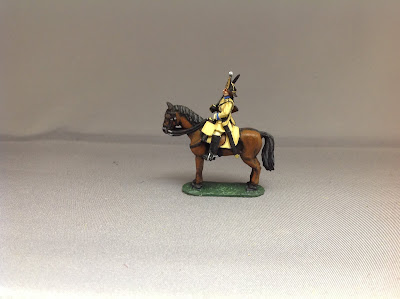 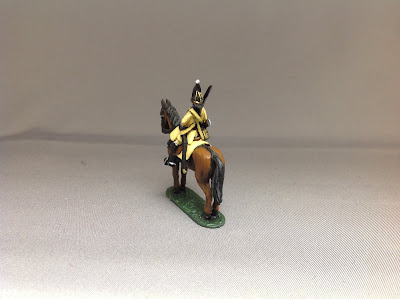 The horse grenadier figure in just the waistcoat is not commonly seen in other SYW Russian figure ranges. Wargame Foundry is the only range that comes to mind with regard to having the Summer kit figure in its range. I think that the figure is rather handsome and will look very nice in a unit with buff troopers and cornflower blue officer, standard bearer and musician.

Cuirassiers and Cossacks are in our plans in the not too distant future.