Yesterday I finished the painting and basing of a 12-figure squadron of the new Minden Miniatures Prussian Hussars wearing busbies, in the shouldered sword pose.

The unit is painted as HR1 Green Hussars using the following product codes:

I have been wanting to add a regiment of the Green Hussars (and the Yellow Hussars) to my Prussian armies for quite some time now. My wargame regiments usually have two 12-horse subunits that I call "squadrons" for lack of a better term. I assume a figure to man ratio of about 1:30 so the regiments have 720 horses. An actual squadron would thus be about 4 figures, which I don't consider to be a viable size for a unit in my rules. 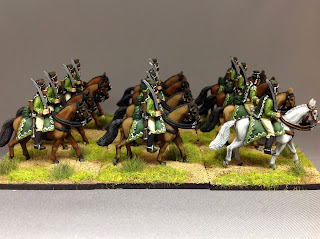 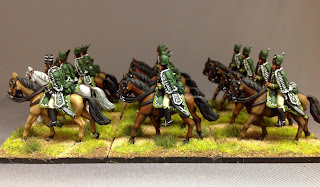 The Szekely Hussar regiment was another one of those super larger 10-squadron cavalry regiments in the Prussian cavalry establishment. For a history of the regiment, click the link to Kronoskaf: 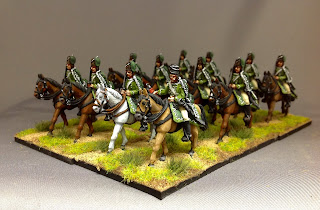 Up Next: the Yellow Hussars wearing mirlitons.