I have embarked on a new 18th Century painting project: building an Austrian army for the War of Austrian Succession with battalions sized at either 32 or 40 figures. I had been experimenting with basing 32 figure Austrian battalions (so that they would be the same number of figures as my new Prussian battalions) on deeper bases, but the same frontage as before.

This started when I painted a battalion of Austrians in a firing line, which required deeper bases to protect the extended musket and bayonet. The extra depth of the stand made it possible to add a third rank of file closers (NCOs, officers and drummers). The end result looks realistic to me (see the next two pictures below). 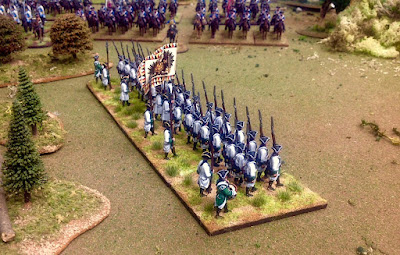 Really Cool Looking Flags
At the start of the WAS, the Austrian army was still using flags of Charles VI, the father of Maria Theresa. Charles died in 1740 and while it was customary for new flags to be issued bearing the cypher of the new monarch, the Austrian army of 1741 did not have time to change its standards.

There were a variety of designs including horizontal stripes bordered with flames of alternating red, yellow and black; also flags that had a checkerboard pattern of red and white around the edges of the flag. Another flag pattern had a green field with the Austrian eagle and coat of arms in the center and the edges were bordered with red and white flames.

My newly painted Deutschmeister regiment has the red and white striped flag, which I hand-painted over an image that I captured from Pinterest. 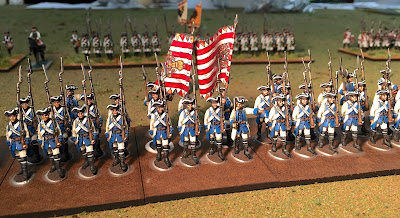 Labels: Austrian Army SYW, War of the Austrian Succession, WAS