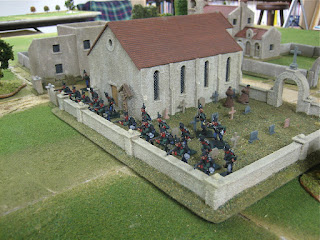 I see that it has been awhile since I have posted anything on my blog. I am fairly certain that it is due to post convention depression or burn out. I had been painting AWI Fife & Drum figures almost non-stop since last June (YIKES, almost a full year ago!) in preparation for running an American Revolution game at the Seven Years War Association Convention in March recent. Add to that all of the hustle and bustle of getting my wares ready to sell at the convention, organizing a wargame, and hauling all of the terrain etc., you can begin to see that I have had a lot on my plate.

I feel like I might have finally turned the corner on wargame burnout. I've been working on a couple of squadron of Vistula Lancers for our Napoleonic game this coming weekend (May 12, 2012) and just finished them at midnight Sunday. Spent another hour cutting out lance pennons and gluing them onto the lance poles. The unit is starting to look good, but I still need to terrain their bases to get them ready for their first battle this weekend. I really needed to paint something different for a change of pace. It pains me to say that I was getting tired of painting tricorns, waistcoats and breeches, but that is indeed the case.

And to think, all of this effort and I have to face them on the table top. I'm playing on the British side.

It actually promises to be a rather interesting game. The scenario will divide the action into a morning scouting session followed by the main battle in the afternoon. For the morning scenario, we will game at a 1 to 1 ratio, meaning each figure represents one actual soldier. It will feature largely light cavalry for both sides and the objective will be to find the opponent's army and to secure a favorable position for the rest of your army for the afternoon game.

Bill P. and I will be commanding two of the British brigades for our inaugural BAR Napoleon campaign in Spain. We will be keeping track of casualties, heros and what not as the battalions of infantry and squadrons of cavalry progress through the campaign. So it will not behoove any of the players to "fight to the last man" as such tactics will surely wreck your regiment and send you home to Old Blighty or to a resting place beneath the Spanish sod. The record keeping will be the same system that Bill uses for his Major General Pettygree Colonial campaigns.

I am really looking forward to our campaign in Spain. I have no idea where it will take me and my 87th Regiment of Foot, but it should be quite an adventure.
Posted by Der Alte Fritz at 1:17 AM