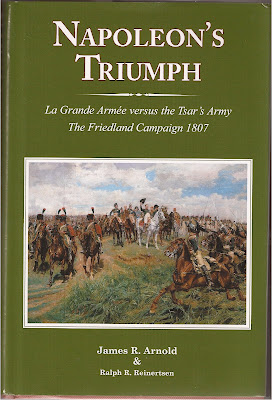 I have just started reading the second book in James Arnold's series covering Napoleon's campaign in Poland during 1806-1807. This follow up on Arnold's Crisis in the Snows: Russia Confronts Napoleon The Eylau Campaign 1806-1807.


This is not meant to be a book review, other than to simply post that I am reading the book and that it is giving me some good ideas for wargaming. I believe that Jim Arnold is a wargamer in addition to being a writer of good historical books. This kind of shows in terms of the quality of his maps and the orders of battle that are included with the book - both of which are helpful in setting up a game scenario. A campaign is made up of many small encounters and battles, leading up to the climax of the big battle, be it Eylau or Friedland.

I already have a French army (1:10 ratio using 28mm figures) and an 1806 Prussian army, and have a brigade of Russians too (with a horse artillery battery - love those Elite Miniatures artillery pieces!), so this book hits the sweet spot for me, in terms of content and a cornucopia of ideas for smaller battle scenarios.

One intriguing idea is the thought of what might have happened had the British followed through with their interest in landing an expeditionary force in Stralsund in 1807, joining coalition partner Sweden. The plan was to send in the King's German Legion, some 9,000 infantry in all, to join the 13,000 Swedes already in Stralsund. From there, they could attack Marshall Mortier's corps and then possibly the garrison at Stettin. This would then threaten Napoleon's supply lines from Berlin to Poland and possibly force Napoleon to call off operations in Poland (not likely in my opinion). I think that Napoleon would have turned his forces on to the British with a vengeance, much like he did in Spain during the Corunna Campaign. Such an expedition would have been highly risky for the British. Ultimately though, this did not happen as British resources were tied up in the failed enterprise to capture Buenos Aires in Spanish owned Argentina (Spain was an ally of France in 1806, thus the British were attacking a French ally).
Posted by Der Alte Fritz at 10:57 AM