Fritz's 300th Birthday (his, not mine) is Coming Soon 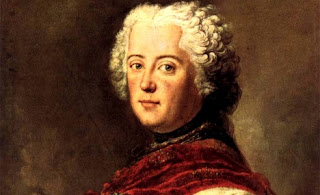 A young Frederick
Whenever January rolls around, I know that it is time to start thinking about the anniversary of Frederick the Great's birthday and make plans for a grand review of the troops on the Marchfeld. For a brief moment I had thought that I had missed His Royal Nibs' birthday, but to my great relief, it is on January 24th so it is not too late to set up the troops and stage the review.
As one might expect, plans are being made in Germany to provide a fete for the Great One's 300th anniversary birthday:
link
So what should I do? Should I stage a review of my 30mm BAR army or one of my smaller Minden Miniatures army?
To assist me in making the decision, I have posted a new poll on the upper left hand corner of the page. The poll will run for 8 days through January 20, 2012. So click on your vote and help me decide.
Posted by Der Alte Fritz at 9:32 PM