I have been very busy the past couple of weeks, although the number of recent posts would seem to indicate otherwise. It's just that I have not had the time to take pictures and post blog entries. Recent work includes painting some Austrian dragoons with Minden figures, some of the new Fife & Drum figures that just arrived from the caster, and some Austrians (shown above) that are destined for one of the imagination duchies.

My customer wanted to add a colorful regiment to his sea of white coated Austrians, and so the Von Loudon Frei Korps or Green Loudon regiment seemed like an obvious choice. I used RSM figures and GMB Austrian flags for the unit. I also added a 6-pounder battalion gun to use with the regiment. I am not sure that the Green Loudons would have had battalion guns, but what the heck, why not? 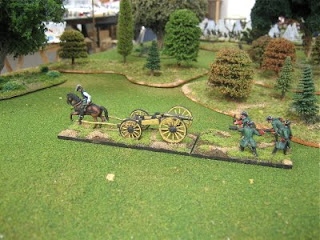 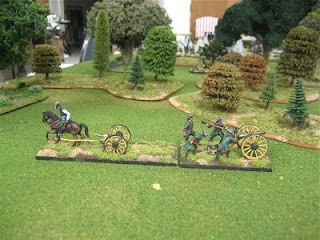 Artillery deployed in battery. Note that the gun model is not glued to the stand so that it can be shown with the limber, when it is limbered, and with the crew, when it unlimbers.


I figured that if the Green Loudon regiment had battalion guns, then they would use Austrian cannon, painted in ochre yellow Austrian colors, but would be manned by men from the regiment. Thus the gun crew are wearing the green with red facings livery of the regiment. 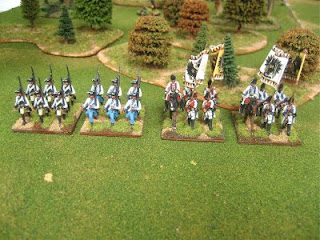 The client also asked me to make some more command stands for some of his existing units (Minden figures - the two right hand stands) plus some extra stands for a Hungarian and an Austrian regiment that I had previously painted for him. The other figures on the left are RSM figures.

Fife and Drum Continentals & British Guards
I have posted pictures of some of the new AWI figures that recently arrived and are available for sale. Head on over to my Fife & Drum blog for a look.

I also have some nifty looking pictures of my Austrian artillery that I will post in another day or two.
Posted by Der Alte Fritz at 11:50 PM