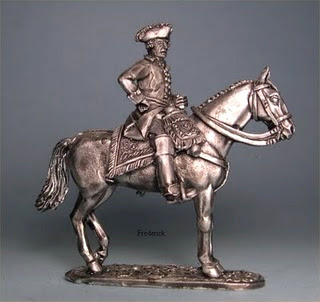 Well this really made my day - the announcement that the Austrian and Prussian senior generals and staff are now available from Minden Miniatures. Click Here.

I immediately bought two sets of everything with the Austrian and Prussian figures grouped into sets as follows: 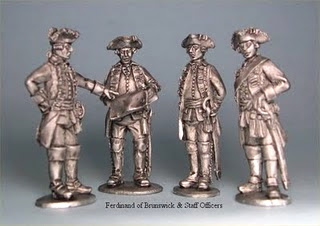 Just looking at the Prussian officers and staff on foot immediately conjures up all kinds of vignette possibilities. For example, you could combine the above group with one or more of the Minden hussar horseholders or the civilian horseholders to create a little staff meeting. Maybe add small table made from bass wood or balsa and card, print out a miniature map and spread it over the table and, Voila! Instant vignette.

Frank Hammond (Mr. Minden Himself) also announced that he has a standing horse available, in addition to the trotting horse, but you have to specifically request the standing horse when you order one of the mounted regimental colonels or else it is assumed that you wanted the walking or trotting horse. Regrettably there is no standing horse with saddle and horse furniture that one could use for vignettes, but perhaps this will be added later along with the pending 18th Century civilian range that is in the works. No problem, just make your own horse furniture with paper and green stuff and you are good to go. I will show you how to do it within a couple of weeks.

I am looking forward to adding the new Minden bling of personalities to my ever growing Minden Austrian and Prussian armies. This stuff is better than anything else on the market. Thank you Frank, and thanks to the talented Richard Ansell for sculpting these masterpieces.