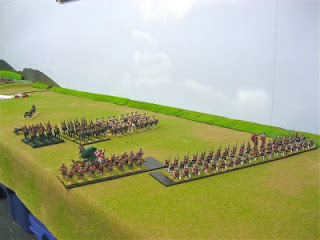 British Guards and Keith's Highlanders (both Suren figures) keep the French entertained on the allied right flank. They are backed up by two squadrons of Household Cavalry (Staddens) on the left and Hanoverian Dragoons (Front Rank) on the right. Click all pix once or twice to enhance your viewing pleasure.

Here are the remainder of the pictures that I took a couple of weeks ago at the Battle of Waldeck. My memory of the events is beginning to fade, so I will just post the pix with captions and let the captions tell the story. 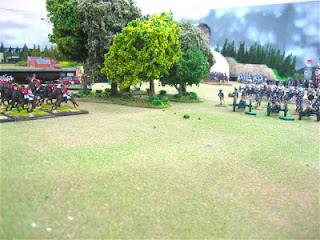 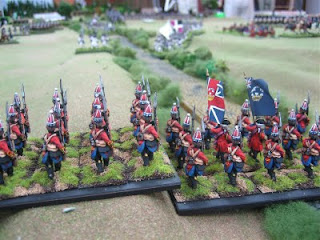 Royal Welsh Fusiliers advance up the sunken road after chasing off the French Auvergne regiment. Elite Miniatures painted by Leonard Albright. He did a nice job on the flags too! This unit is proof that you can play the BAR rules with 30 figure regiments, such as this one. 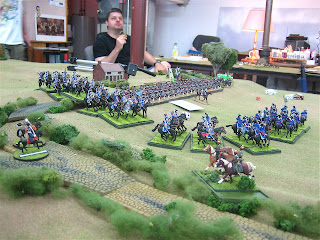 The French Carabiniers (Elite Miniatures) arrive on the field. Les Gardes Francaises (Surens) form a second line on a handy ridge where the retreating French infantry can rally. Lanciers de Saxe (Surens) are skirmishing in the foreground. 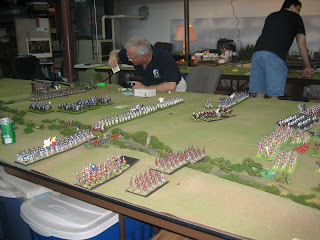 Les Carabiniers manuever to the front of the French line. They were eventually well positioned to charge into the flank of one of the British battalions in the top right corner. They also took out the Allied 12-pounder battery, before the remnants retired back to their own lines, with many battle trophies. 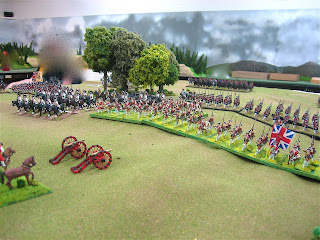 Lord Granby gives the order for a general advance of the British army as the French fall back to the second ridge, anchored by Les Gardes Francaises. The 44th Foot (Surens) are in the foreground flanked by Hanoverian dragoons (Front Rank) 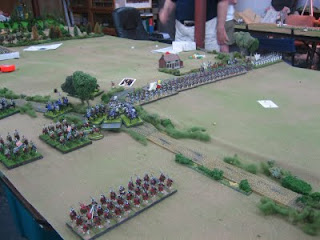 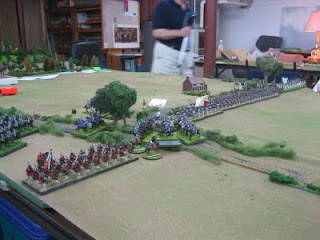 A pair of pictures showing the retirement of the Carabiniers. The Irish Regiment Bulkeley (Capitulations Figures) is seen in the foreground in their colorful red coats.


A rather interesting decision had to be made by the British commander (me) near the end of the game. Through some skillful maneuvering, the French Carbiniers had positioned themselves to charge into the flank of a British battalion on the ensuing turn. It would all come down to who drew the first initiative turn. I had a joker on hand so I could use it to trump any initiative card that the French might draw first, thus allowing the British battalion to turn its facing and fend off the inevitable cavalry charge.


However, it was a little more complicated then that. For on the prior turn, the British badly needed the first fire initiative card so that it could blow away the opposing French battle line My colleague commanding the threatened British battalion wanted me to save the joker in case it was needed to trump the French initiative on the next turn. But I felt that it was more important to use the joker trump card on the prior turn during the musketry phase. There had been a nice run of French cards from the card deck, so the odds were in favor of the first initiative card on the next turn being a red British card.

I weighed my choices: use first fire this turn and hope that the odds favor the British getting the first initiative on the next turn (thereby preventing the French from charging their horses into the flank of one British battalion; of two, cede the first fire on the current turn to the French and guarantee that the British would have the first initiative on the next turn, thus stopping the cavalry charge.

I chose to opt for the first fire on the current turn and take my chances on the initiative card draw. So I used the joker card to fire first -- a French battalion broke and ran while the other battalion was much reduced in strenght. So far so good. We all waiting for the first initiative card on the next turn. Would it be a black card (French ) or a red card (British)?

It was a black card!


The Carabiniers commenced their trot towards the flank of the first British battalion. I figured, oh well, we will probably lose the battalion but there is a chance that it wins the melee. But then Bill Protz did something that I was not expecting -- he peeled off a squadron of Carabiniers to charge into the Allied 12-pound battery. I was not expecting this move by Perfidious France. The battery was wiped out by the charge. So I would have lost it no matter who had the first initiative on the turn because I did not see this one coming.

The British battalion was struck in the flank. A second battalion to its right had time to change its facing towards the Carabiniers and avoid a similar fate. We then played out the melee, and darn it but the British nearly won the melee, losing by one casualty (the French did not roll very good dice during the melee, making a British win possible). They routed and the Carabiniers elected not to pursue into the teeth of the British battle line. Instead, they turned around and returned to their lines.

Who says that you need special rules to create a fog of war in the wargame? This goes to show that the individual players in the game create plenty of fog of war on their own, without the aid of restrictive special FoW rules. I had to make a decision with respect to the use of my trump card. Either way, the British would win a little and lose a little. So I elected the certainty of firing first on the current turn and waited for chance or Fate to determine what would happen on the ensuing turn. In none of my calculations did the possibility of losing all of our artillery come into play. It was not a possibility that I could envision, but there it was staring us all in the face and all of the four British players missed it.

It was a fun game with lots of to and fro, give and take, and unexpected turns of events. In a word, we had a blast.

So the French infantry began to tumble back to the last ridge line that was bulworked by the reserve of Les Gardes Francaises. The French rallied all of their infantry onto this position and presented a formidable defensive line. The British were not about to launch and assault on this ridge, not without their artillery, which was all gone by now. It was the concensus though that the British had won the battle, having pushed the French army back in the center and on both flanks. Huzzah, a redcoat victory at last!
e
Posted by Der Alte Fritz at 7:33 PM