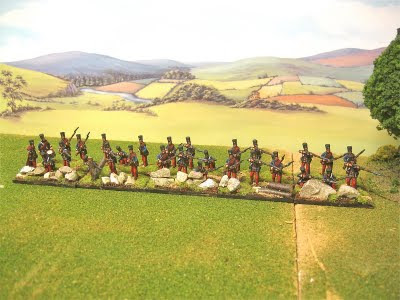 Minden Croats painted as the Karlstadter Oguliner regiment. Click once or twice for the enlargement of the pix.


I have been working on another regiment of Croats to add to my own Austrian army. This is what happens when one contracts a case of Croat Fever. This will be the second of three regiments that I will have painted recently, one for myself and two painted on commission. (a red and a white coated unit, each). 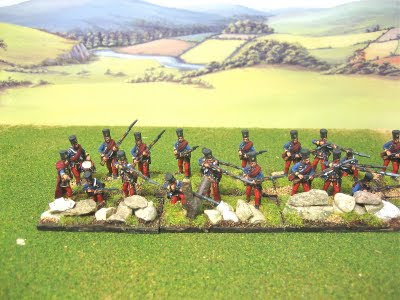 As usual with all of my light infantry, I base the figures on a 30mm by 60mm base placing only three figures on each stand, so as to give the appearance of men in an irregular looking open order formation. In my rules, when you see a stand like this, then you know that the unit can not operate as a "formed" unit. (which is really bad if the unformed is charged by a formed unit).

I then terrain the heck out of the stands, building little stone walls from pebbles that I find when I walk the royal hounds, or add bits of twigs cut down to size to represent logs or tree stumps. I don't want the muskets to break off from use, so I pose the firing figures at nearly 45 degree angles so that very little of the musket extends beyond the edge of the base. I also like to have some of the muskets resting on tree branches or stumps, or even rocks, which look like boulders at this scale.

Next on the list: a Croat command stand using a Minden Austrian Hussar Officer and a dismounted Croat officer. Both appear to be pointing off in some direction (I don't know what it is that they see). They should make for a nice little vignette.

Since it was Fathers Day, I spent a lot of time with Lady Emma Cuddlestone-Smythe and simply enjoying being a Dad on a day like this. We were going to play catch in the front yard, but then one of Lady Emma's friends came along and wanted to play. Oh well, we can play catch some other time.
Posted by Der Alte Fritz at 7:18 PM