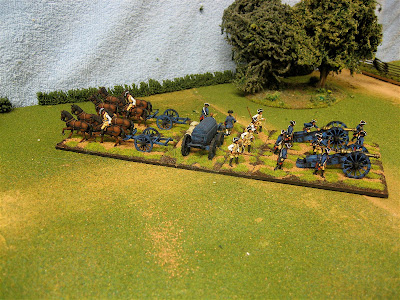 Prussian 12 pound battery of two Berliner Zinnfiguren guns and limbers, RSM horses and rider, Front Rank supply wagon, and Minden Miniatures artillery crew and pioneer figures (in waistcoats). They all fit together rather nicely. Click or double click the picture for an enlarged view.


I have been working on new limber teams to use with my Minden Prussian artillery crew and Berliner Zinnfiguren "Metalmodel" 30mm guns and limbers. I decided that the gun models were so nice that they deserved to have at a team of four horses to really show them off in their best fashion. The limber and gun sets do not include horses, but fortunately, the RSM95 limber horses are perfect fits with both the gun models and the Minden artillery crew figures.


As I studied the limber, I realized that I would have to provide my own reins or traces to attach the limber to the horse team. The following picture shows the unpainted RSM figures with florists' wire attached to the limber and the horses, prior to priming the figures. 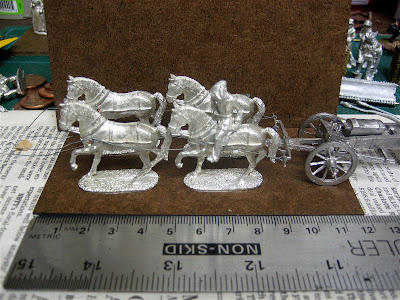 I am using 120mm long by 60mm wide MDF bases for the limber teams. The cannons will hang over the edge of the base when they are limbered up for movement. 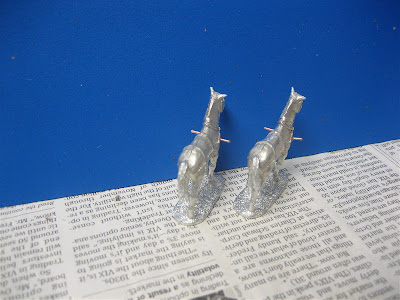 I drilled two holes into each limber horse and glued a metal pin into each side so that I would have a post to attach the limber traces (made from wire). 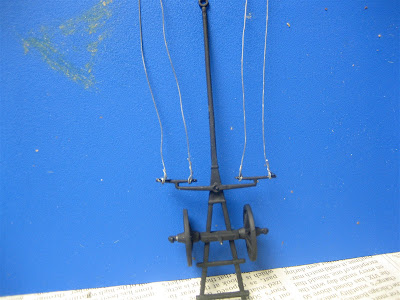 The limber traces, made from florists' wire, were cut to a length of 5-inches. One end was looped around the horizontal hitch bar. After priming, the other ends were wrapped around the metal posts that I inserted into the horse (see previous picture).


The first attempt to attach the traces to the horses proved difficult as I accidentally glued the traces to one set (left side) of each horse. This meant that I now had to prime the figures with everything attached. Don't do this if you want to retain your sanity, as it is nearly impossible to wrap the wire onto the posts on the inside half of each horse.


For the second set of limbers, I primed the traces - attached to the limber, and the horses separately. Then I wound the wire around the posts on each horse. So far, so good, but then I was faced with the difficult task of trying to glue the horses (now attached to the limber) to the wooden base. Again, not good because it becomes difficult to line up the horse with enough space between the front and the rear horse in the line.


The best assembly method is to glue the wire traces to the limber. Then prime everything and set all the pieces up on your model base. Position everything so that you have some space between the hitch bar and the back horse. Now glue the horses onto the base. Then wrap the wire around the posts. And finally, glue the limber wheels to the base. I would also suggest attaching your cannon to the limber whilst positioning the limber bar, as this will keep the center bar in its final horizontal position. Once the horses and limber wheels are glued down, then wrap your wire around the posts that you have attached to the horses. (Oh, I would add that you have already painted all of the pieces before gluing all the bits together). 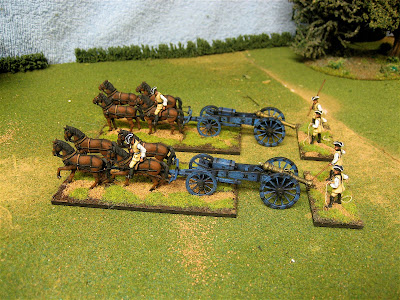 Here is a closer view of the final limber assembly with the matrosses walking behind the limbered guns. Note the limber in the foreground with team of trotting horses: you can see that the end of the limber is barely extending beyond the end of the base. This is what happens if you try to glue down the pieces as the last step, you can run out of space on your base. The standing limber team ha better spacing on the base as I glued the horses to the base first, then assembled the other pieces. Double click the picture to enlarge the view and get a better look at how I wired the traces.


After two limber sets, I believe that I have the assembly system nailed so that the next two sets will be much easier to assemble. For every two gun models, I will initially have one supply wagon positioned perpendicular to the gun base. See the first picture at the top of this blog entry to see how this looks. Eventually, I might go crazy and provide an ammo supply wagon for each gun model. The overall look of the battery conveys the sense of how deep the footprint of the battery is, i.e. there is a lot of "stuff" positioned behind the cannon and crew that give the battery depth and take up a considerable amount of space on the battlefield.

I will get back to the Summer Sale in a couple of days as I post more RSM cavalry: 20 x Zieten Hussars and 40 x Bayreuth Dragoons, as well as a 20-figure regiment of Bosniaks from Front Rank. Hussars and dragoons are $6.00 each and the Bosniaks are $7.00 each due to the complicated shabraques, striped lance poles and lance pennons. Drop me an e mail at :

altefritz1740@ yahoo.com if you have an interest in the Prussian cavalry.
Posted by Der Alte Fritz at 10:03 PM