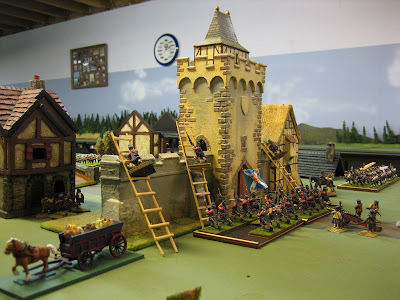 On Saturday July 12th we convened at Brown Deer to fight the next battle in our Jacobite rebellion. The scenario was that the Pretender's forces were seeking powder and arms to supply their growing army and word filtered back to Prince Charles in Edinburgh that the town of Carmudgeon, to the north, was loaded to the gills with ball, powder and several thousand brand new Brown Bess muskets. The Jacobites quickly put a strike force together to raid the arms depot before word would reach the Government garrison, commanded by Colonel Munro of His Majesty's 44th Regiment of foot.

The battle was to be divided into 3 separate battles, each covering a day. On Day One, the Jacobites would assemble in front of the town of Carmudgeon and attack it. Hopefully, they would drive off the garrison of the town and move on to Carmudgeon Castle, where all of the munitions were being kept.

On Day Two, the Jacobites would attack the outer defenses and the redoubt that guards the road to the castle and drive the garrison back into the fort.

On Day Three, the Jacobites could elect to scale the walls of the castle in an escalade (complete with purpose built ladders for the game) or settle down into a siege of the castle. 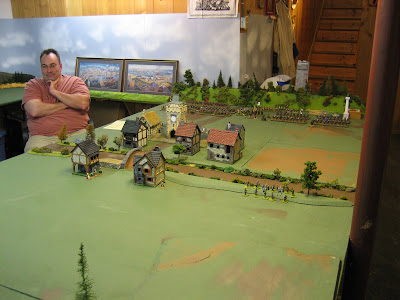 The town of Carmudgeon and the Cardhu Burn from the Government's side of the water. 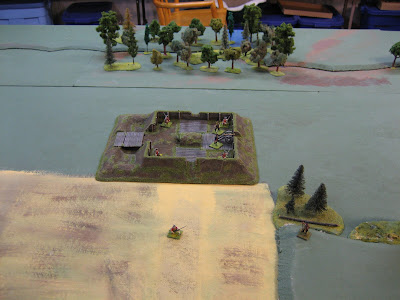 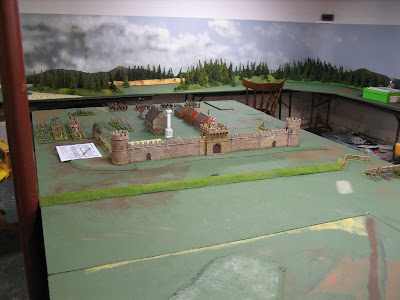 Carmudgeon Castle - the Day Three objective where all the munitions were stored. Castle walls from Miniature Building Authority.

The Respective Forces
The Government forces commanded by Colonel Nicholson consisted of 120 foot, 60 militia and 40 dragoons, plus 36 pounds of artillery and supporting crews. Their quality was determined by the roll of a D6 (six-sided die) as Poor (1-2), Trained (3-4) or Veteran (5-6). Additional reinforcements were available, as determined by a die roll of which I, as Jacobite commander, was not privy to. Local farmers advised the Prince that a column of redcoats was marching down from Fyvie-o to support the garrison of the castle.

The Jacobites had a rather large force of 360 foot and 6 light horse plus up to 42 pounds of artillery and crew. (In practice, we only used two 3 pounders and I think that we only fired them once or twice throughout the whole game). Jacobite troop quality was 1/4 each of Poor, Trained, Veteran and Elite. If I had to do it all over again, I would eliminate the Elite troops from the Jacobite force as they had plenty of foot soldiers to overwhelm the redcoats.

Day One: Storming the Town 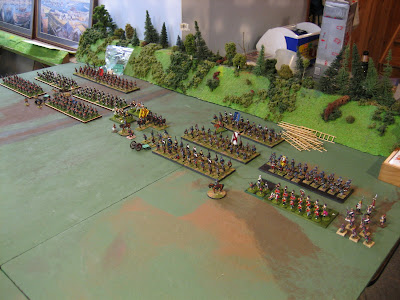 The Jacobite army deploys in front of the town in two wings: the right wing commanded by Lord Talisker and the left wing by Lord George Murray. The Prince and his escort are seen in the center.

The dilapidated town walls of Carmudgeon town did not prove to be of much help to the Government garrison. The Jacobites rapid movement of 15-inches plus one D6 meant that they were storming the town walls by Turn 2. Several companies of the 44th Foot manned the walls, the bell tower and a few of the buildings, but Captain Nolan, the leader of the town contingent, quickly saw that a defense was useless and so he pulled his troops out of the town lickety split. 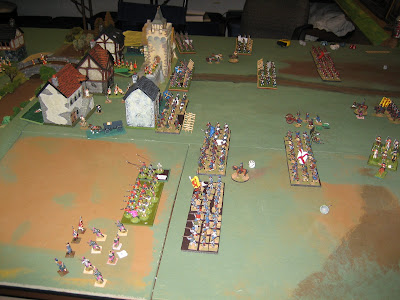 By Turn 2 the Jacobites were already in the town. Murray's wing skirts around the town and heads for the stream, hoping to cut off the retreat of the redcoats, while Talisker's wing attacks the walls with scaling ladders.

Lord George Murray placed two of his clan regiments (MacDonnells and Clan Chisholm) under the command of Colonel vonn Bergmann, an adventurer from Tradgardland who had come across the North Sea to join the Rising, and gave him the task of capturing a battery of Royal Artillery. Afterall, the Jacobites needed cannon as much as they needed ball and powder. 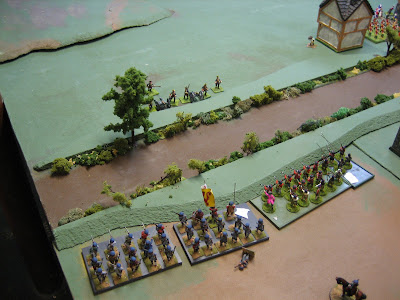 Colonel vonn Bergmann leads the MacDonnell's (left) and the Clan Chisholm regiment to the burn, where a brace of 6 pounder Royal Artillery awaits them.

The Jacobites stormed across the stream like possessed demons. Nothing could stop them and soon they overwhelmed the Royal Artillery battery that tried to cut them down with cannister. Vonn Bergmann grabbed the lieutenant commanding the battery, pointed his sword at the fellows neck, and declared, "I'll have those guns sir - surrender or die!" With the rest of his battery crew either dead or running away, the lieutenant had no choice but to surrender the first battle trophies to the plucky Tradgardlander. 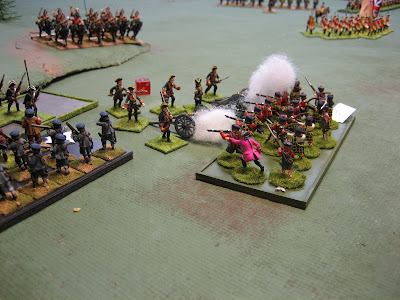 Vonn Bergmann (in pink coat) leads his men into the maw of the Royal Artillery, with successful results. 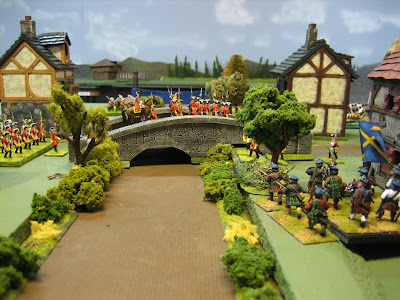 Clan Stewart regiment pours a flanking fire into the company of the 44th Foot that are trying to defend the bridge. They fall back to the left of the picture to where the rest of the regiment is formed up. 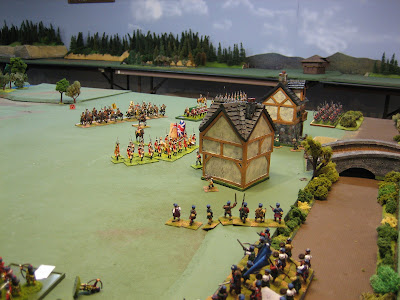 The 44th Foot reforms on the west bank of the burn. Stewarts and Frasiers are working their way across the water to support the attack. 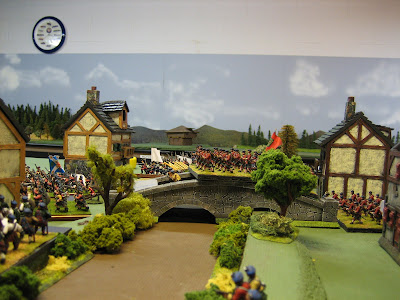 Albany Regiment has crossed (left) while the Camerons (right) cross the bridge over the Cardhu Burn.

The Government forces reformed on the west bank of the Cardhu Burn and allowed the Albany Regiment to come across the bridge. The plan was to then pour in a volley of musketry and follow it up with a cavalry charge. This proved to be a successful tactic as two squadrons of the 10th and the 11th Dragoons pitched into the blue-coated French volunteers d'Albany and drove them back across the river. 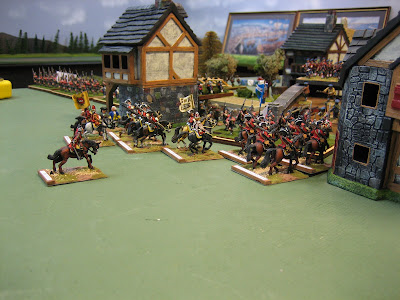 Fortune smiles on the Hanoverians, albeit briefly, as the 10th and 11th Dragoons (Old Glory figures) smash into the Albany Regiment and rout it across the bridge, and into the waiting Camerons. Much confusion on the bridge, and a glimmer of hope that the whole lot will rout.

Some of the Jacobite artillery crew that were crossing the bridge suddenly saw a mass of kilts and horses coming their way. They had no choice but to dive off the bridge and into the water. We rolled a D6 for each figure and a Snake Eye (#1) would result in a drowning. All of the artillerists survived the leap into the water. 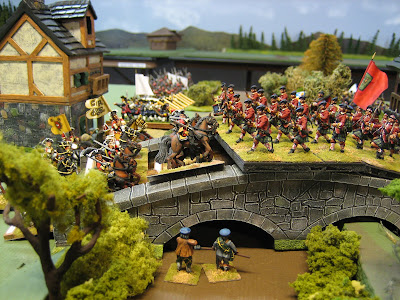 A desparate hand to hand melee on the Cardhu Burn bridge. The veteran Camerons repelled the brave British Dragoons and saved the day for Lord Talisker's wing of the army. Some of the artillery crew (Perry ECW Scots) are seen swimming in the burn.

The remnants of the Government cavalry retired back to the redoubt and covered the retreat of the infantry as best they could. One unfortunate militia unit (the von Bungle Hessians), though stayed too long and found themselves charged on both flanks by the Jacobites. After this, the rest of the army retired , ending the action of the first day of battle. 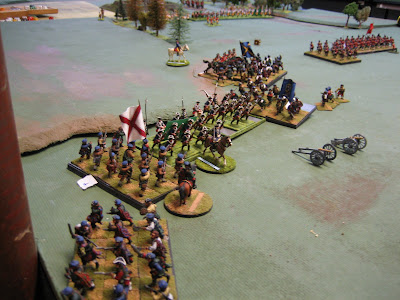 The Hessians get caught on their right by the Athol regiment (white flag with red saltire) and the Frasiers on their left (blue flag). Kids, do not try this at home by yourselves. It is a very bad thing when it happens to you.

I will post a report of the second day's battle (both battles occured in one day of gaming) with more pictures in another day or two. This was a fun battle for the Jacobites, obviously, but the British commander (Bill Protz) did an exemplary job of whittling down the Jacobites and slowing them down for a bit. It was a hopeless assignment, but Bill did as well as anyone in this situation could expect. His cavalry charge could have saved the day had the Camerons also routed, but fortunately for Prince Charles, they held the bridge.

Thanks go to Bill Protz (Colonel Nicholson and Capt. Nolan) and Randy Frye (Lord Talisker) for providing an enjoyable afternoon of gaming, and to Bill for providing the gaming venue.