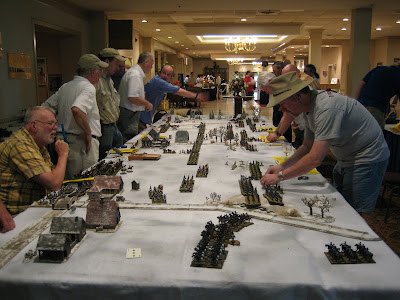 Our Day One battle featured the Prussians and Austrians fighting in the snow. Buildings and roads and trees by Herb Gundt, of HG Walls fame.


I arrived home last night at 7:30 PM after a surprisingly pleasant 12 hour drive from Lancaster, Pennsylvania to Hesse Seewaldt (Chicago area). Randy, Bill and I took turns driving every two hours so the driving was not too tiring. We brewed up lots of good ideas for future convention wargames, tweaked the rules a bit to deal with some of the unusual events that took place in our three games, and discussed future SYW related projects. This is the best way to travel to a wargame convention, with a group of like minded souls. We all had a terrific time. My knees and ankles were rather achy after standing up for so many hours, but things are beginning to get back to normal now that I have had plenty of rest and sleep. 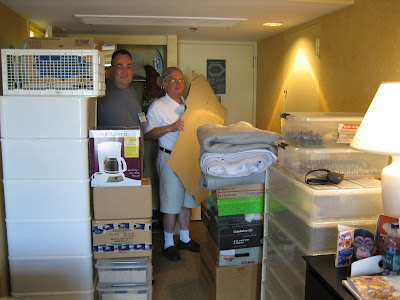 Randy (left) and Bill (right) take cover behind the Mountain of Stuff that we brought to Historicon for our three wargames. This was my room.


We had every thing packed into a 15-passenger van, with three rows of seats removed. You can see the collection of stuff that we hauled in the van, in the picture above. Since my room was closest to the game area, we all thought that it made sense to store everything in my room. Oddly enough, Randy and Bill had double suites, which would have been better suited for storing the Mountain of Stuff, while I had a single room, but as I said, common sense said to put it in my room, and I didn't really mind. I spent the late evening hours talking to the French figures and putting the fear of God into them so that they would perform poorly on the table top. It must have worked, as the Prussians won two of the three games. 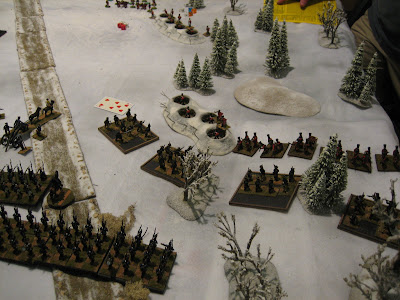 A view of the "wolf pits" that flanked the Prussian attack on the right wing.

The first game that we hosted on thursday evening featured the Austrians and Prussians fighting in the Silesian snows. I just needed an excuse to use all of the wonderful winter terrain that I had Herb Gundt construct for me for my Leuthen Churchyard skirmish game of two years ago. I was reading about the Croats using improvised "wolf pits" at Lobositz and Reichenberg. I took these to be hasty rifle pits positioned forward of the main battle line. Herb did his usual excellent job of rendering my ideas into a final product. I had Herb make wolf pits for both winter white and summer green. These were positioned across the table in various places and they proved to be very pesky to the Prussians, who had a hard time evicting the Croats from their wolf pits. 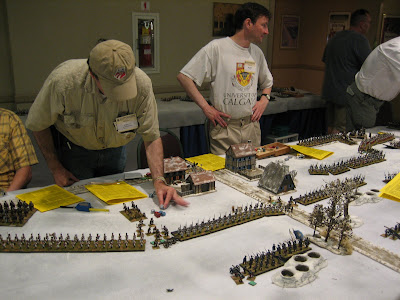 A view of the Austrian centre and the village that they were defending. The Prussians have finally negotiated their way past the dreaded wolf pits in the foreground.

You can read all about my rediculous spending in the dealer area from the previous blog posting. Suffice it to say that there are many temptations in the dealer area. Eureka Miniatures, Old Glory and Pontoonier Miniatures were the lucky dealers that tapped Der Alte Fritz's wallet today. 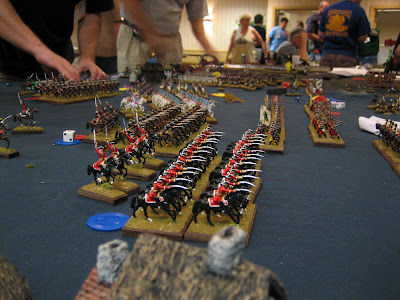 Chris Brooks' Spencer Smith Miniatures game caught my eye on the second day. The entire table was nothing but SSM figures that Chris has been collecting over the past two years. 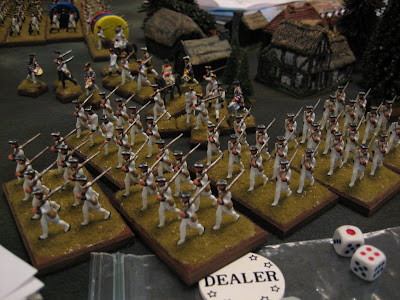 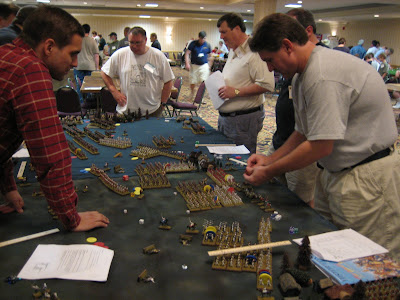 I later discovered that the Spencer Smith game was actually a refight of Charles Grant's Mollwitz battle from his book, "The Wargame."

I tumbled out of bed around 9 AM and headed for the Vista Lounge in search of fruit for my breakfast. In this I was successful as there was plenty of berries, melons and orange juice to be had. The body craves healthy food after eating so much sugar and carbs for two days. I had a nice conversation with old friend Bob Coggins and had a nice chat with Duncan MacFarlain and Herb Gundt over the breakfast table. Then it was off to the dealer area again, on the odd chance that I had missed something yesterday. Dash it all! Those fiends at Pontonnier Miniatures now had those Baden 1806 Napoleonics painted and displayed at their booth. My will power broke like a dam in a rainstorm and soon many pounds of figures were flowing into my shopping bag. I also bought a copy of Waterloo and Der Grosse Koenig (with English subtitles). 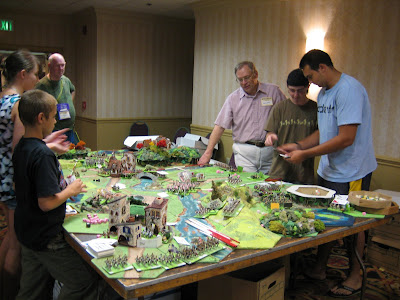 Otto Schmidt's "Oh God, Anything But A Six!" game with Surens and Staddens and RSM figures, oh my!

I finally got a chance to meet Jerry Lanigan and Otto Schmidt, of the Society of Daisy Group, and I had a good time chatting with them. Otto's mind is full of many wonderful ideas and I could have talked with him all day. It looked like kids and grown ups were having fun playing in his games.

Later in the afternoon, Randy and I helped Bill Protz set up miniatures for his discussion of 18th century battalion tactics. We formed a battalion at a 1 to 1 figure to man ratio, so that was 600 figures lined up in three ranks, just like they would have been in the 18th century. Bill used a normal BAR 60 figure battalion to represent a peleton or platoon of French infantry. Eight participants were designated as platoon commanders and they maneuvered their platoon from column to line and back into column again. It was really interesting watching the evolution of the battalion through its various formations. Everyone came away with a better sense of how difficult it could be to maneuver a battalion in the field. 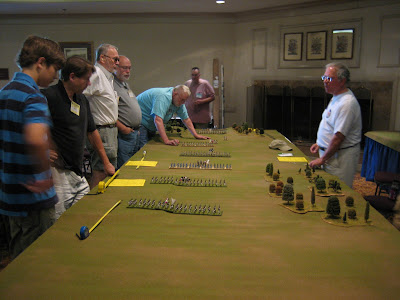 Colonel Protz issues commands in French to his platoon commanders as they march across the table in a column formation. The platoons wheel to the left to form up in line formation.

We then set up another wargame for the Saturday evening battle between the French and the Prussians. Friday's game had 15 battalions and more cavalry than I can count. So we scaled it back to 12 battalions for tonight's game. Alas, I forgot to take pictures of the game. I commanded a battery of horse artillery and the battalion of the Guard Grenadiers in the Prussian army. I was facing a young lad who was very aggressive and coming at me likety split. I begged my neighboring commander to loan me some jagers, anything in fact, in order to entice the lad into spending his first fire (+5 bonus in the firing tables) before he reached my Guards (who were the only infantry in the sector). A battalion of Prussian fusiliers also edged to its left to help me out, and finally, after getting hammered by Prussians on both ends of his battalion, the lad fired off his first volley and dropped a lot of jagers and horse artillery crew. With 12 saving throws, I somehow saved all but one of the crew. Huzzah. Now that the French player had spent his first fire, I advanced into point blank range and unleashed a withering counter fire of 60 muskets, inflicting 45 hits. The lad saved probably half of them, but I tip my cap to this unknown youngster who nearly had me on the ropes. 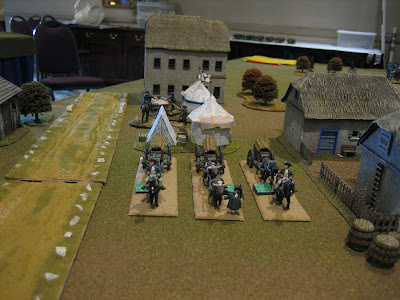 A view of the Prussian encampment of Der Alte Fritz. Buildings by HG Walls, roads by Der Alte Fritz, terrain mat by The Terrain Guy.

We set up our final game on Saturday morning and had everything done 45 minutes before the start of the game. This time, we only used 9 battalions and a smaller number of cavalry. It occurred to us sometime after Friday night's game, that less stuff on the table top equals a faster putting away of stuff at the end of the game. Today's game was played on the long axis of the table for a change. The Prussians had an advance garde in the center, holding a defensive position on a ridge line. Hoards of French were streaming towards them and a couple brigades of Prussian horse and foot were racing to the center of the table to relieve their Prussian comrades. The French objective was to take the hill and capture the supply camp, shown two pictures above. The Prussian objective was to hold until relieved. 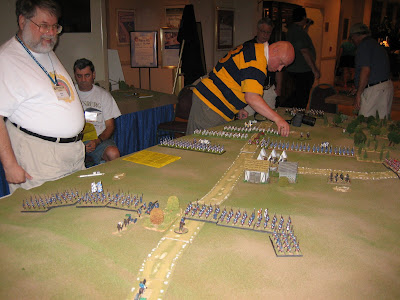 Old School Wargamer Ross Maker looks happy. He should be, his stand of jagers charged into a limbered French 4 pounder and captured it. The picture shows the positioning of Ross's advance garde of the Prussian army as it watches the arrival of the French. 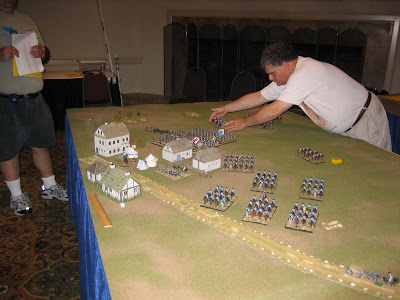 The Prussian cavalry arrives in the nick of time and prevent the French light cavalry from sweeping in behind the Prussian brigade defending the hill. 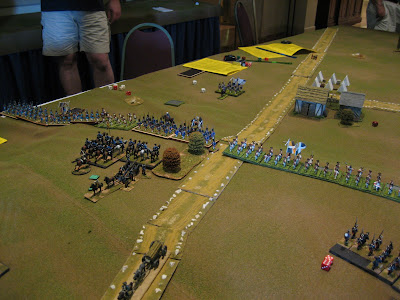 Alas, it is all for naught, as the French sweep the Prussians from the hill and the rest of the Prussian army has to fall back.

The French finally got on the score board by stomping the Prussians rather convincingly on the third day. On one table, there was a giant cavalry battle that sucked in all of the Prussian heavy and light cavalry. The commander wanted to also commit the dragoon reserve in the center, buy the dragoon colonel (moi, me) declined to throw in the dragoons as they were shadowing the French light cavalry on the other flank. I tried to charge the dragoons up the middle, hoping to rout some French grenadiers and tumble them back into the second line of infantry that was trudging up the hill behind them. If successful, this could have broken the French middle, but the grenadiers held fast and my dragoons routed off the field. I was tempted to charge two more squadrons of dragoons, I eventually did, but they two were repulsed by the French grenadiers. As the left flank cavalry battle turned in the French favor, we had no choice but to withdraw from the field.

I made one last trip to the dealer area before it closed at 6pm on Saturday night. I purchased a hot wire knife to use for sculpting foam terrain pieces. My plan is to make some hills that I can place beneath the game mats that we used in this game. We really liked the mats - they were easy to set up (much better than using terrain boards) and transport. Eventually, we will make some terrain pieces that can be set atop the mat, or for steeper or bigger hills, underneath the mat.

It was an exhausting three or four days at historicon, but we all agreed that it was worth it and we enjoyed meeting many of the Old School Wargaming members. I finally got to meet Otto Schmidt and John the OFM in person, two of the more interesting personalities in this wonderful hobby of ours.
Posted by Der Alte Fritz at 2:28 PM