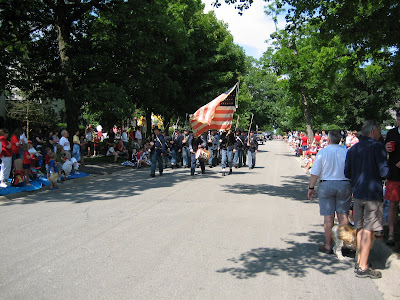 ACW Union Colour Guard Leads the Parade today. (click on all pictures to enlarge). Old Glory waving in the breeze is a stirring sight to behold.


I would like to wish everyone a happy Fourth of July as Americans celebrate the founding of our country on July 4, 1776. We celebrate by having hokey, but fun parades, visiting friends and relatives for cooked meat on the barbecue grill, lots of baseball and frisbee tossing, and then ending it all with a grand finale of evening fireworks. My daughter and I went to the annual Lake Bluff, Illinois parade and I thought that I would share a few of the photos that I took. It doesn't get any more American than this. 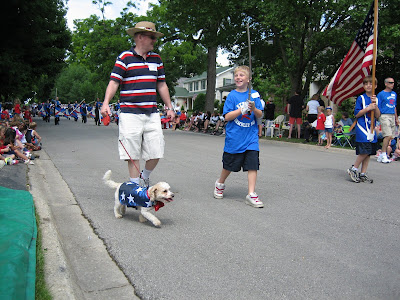 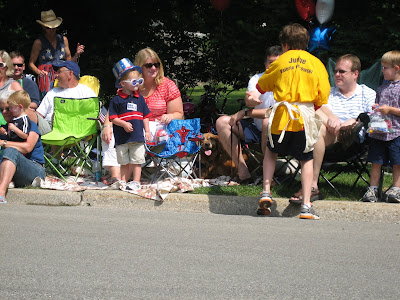 The politicians don't miss a chance to hand out stickers to the crowd. I love the boy in the top hat. 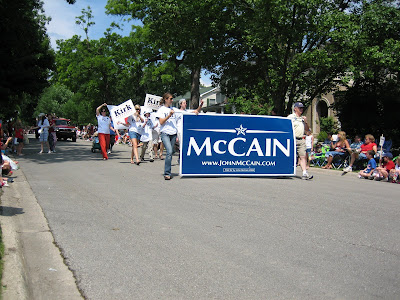 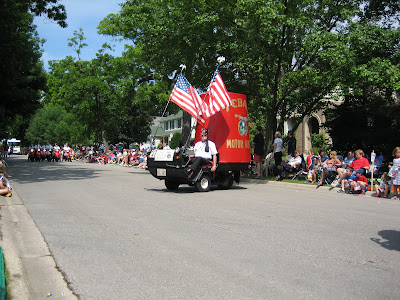 The Shriners and their silly looking motorcycle team are always a sure crowd pleaser.

The parade always has its fair share of motor vehicles and fire engines and antique automobiles. The Humvee is from a local museum of old military vehicles. 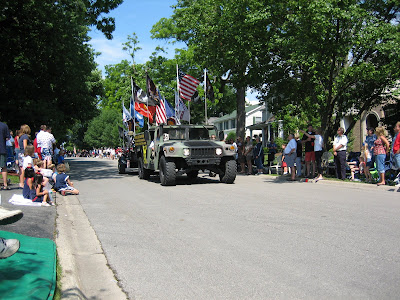 A flag adorned Humvee motors on down the road. 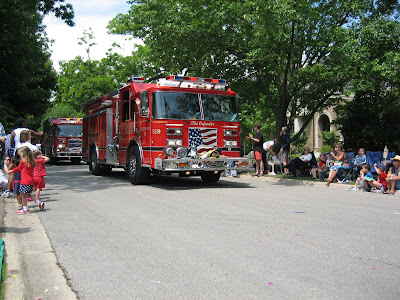 The local fire department vehicles are covered with red, white and blue, and boy oh boy are their sirens loud. 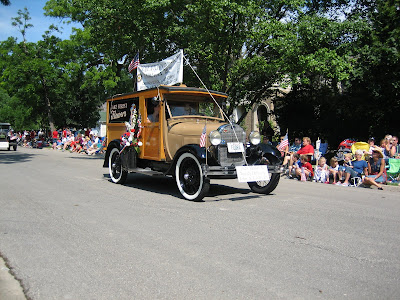 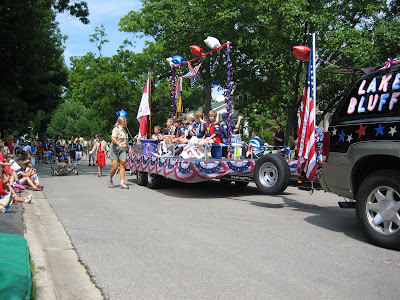 The Cub Scout float. Looks like they are having fun. 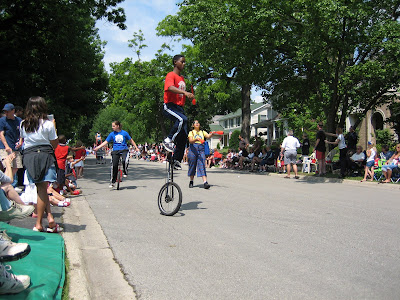 Dare-devil circus acrobats. I wouldn't want to try this. 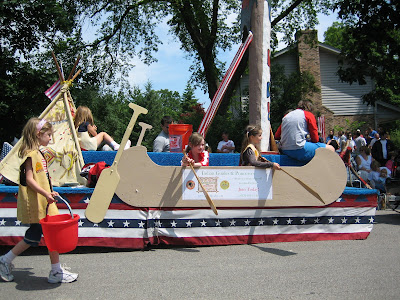 The Father-Daughter Indian Guides Float. I may want to get involved in this for next year. 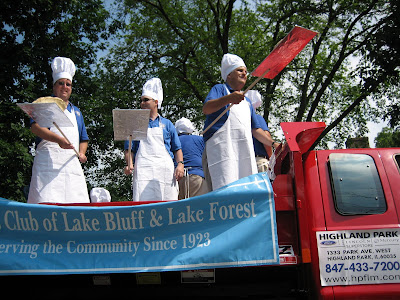 Another local group publicizing their pancake breakfast fund raiser. Anyone can enter a float or event in the parade. All you have to do is ask. So a lot of local groups or neighbors just get the burr under their saddle to be in the parade, and so they do.

And of course, what would a parade be without the marching bands. They come to Lake Bluff from all over the midwest United States: Kalamazoo, Michigan; Racine and Kenosha Wisconsin and other points nearby. 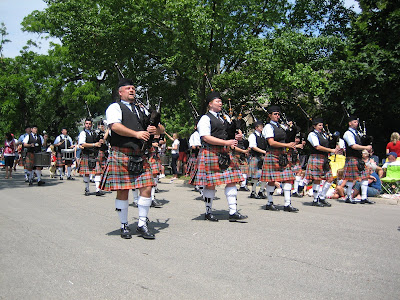 The Midlothian Pipe and Drum Band, tis always one of my favorites in this parade. Wow, for some reason, those pipes really get me stirred up and ready for some action. 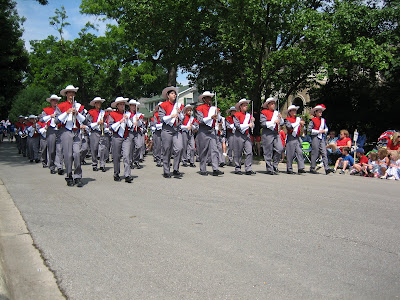 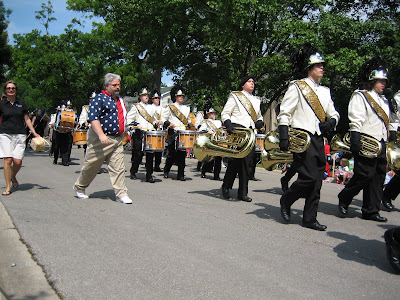 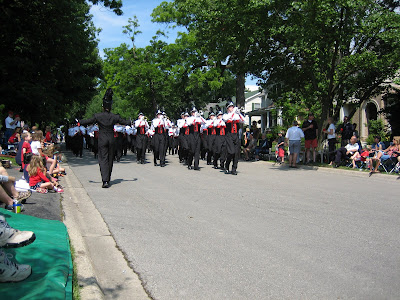 A trio of marching bands from around the midwest entertained the parade crowd. 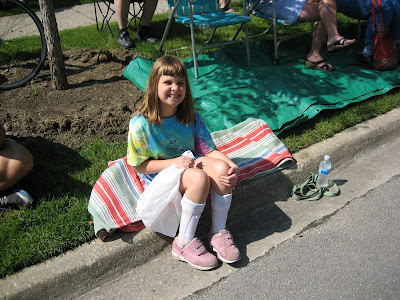 Here is a picture of the Princess enjoying the parade. She has come equipped with a plastic bag this year in order to have a place to hold all of the candy that gets tossed to the crowd by the parade float participants. 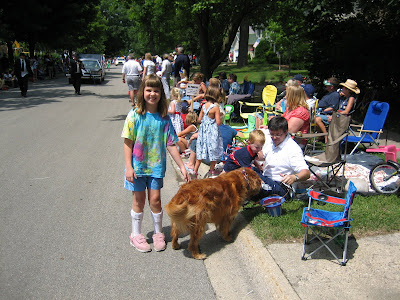 The Princess making some new friends. In the background you can see Jake and Elwood Blues coming down the street (click the pix to enlarge). 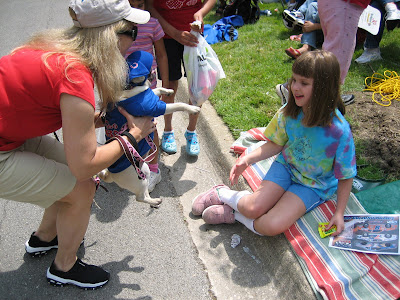 The Princess meets and greets a Pug.

Well, that is all for now. I'm off to the cook out for some burger, corn on the cob and some ice cold leminade. We will go to the fireworks later this evening. Happy Fourth of July Everyone.