Sometimes You Just Get Lucky

I've been looking for the HaT sets of Spanish Cavalry (#9055) and Carthaginian Cavalry (#9056) for quite some time now. Both sets are out of production right now and so they are as hard to find as hens' teeth. I have seen the occasional set of 9056 Carthaginians, but the Spanish were the virtual unicorn of HaT figure sets. I almost did not believe that the Spanish cavalry even existed.
The other night I was reading in bed and on a whim I picked up my iPad and did a random search for the Carthaginians, and what to my surprise but I was able to purchase both sets! It gets even better though - I was able to pick up a second set of the Spanish cavalry and now I await its arrival in the post. 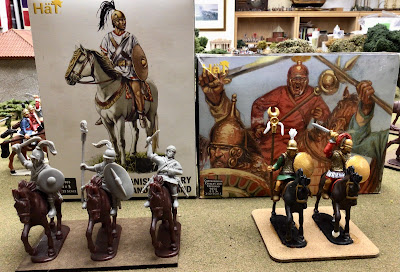 Here is a picture, below, of the four poses of Spanish cavalry in the box. You get two of each pose for a total of 8 figures in the box. With two sets, I can create a 16-figure unit of Spanish cavalry and brigade them with 16 Carthaginian heavy cavalry. These 32 figures plus 32 Gallic cavalry will make up one of the Carthaginian cavalry wings. The other wing will consists entirely of Numidian light horse, possibly as many as 48 figures.

On the Painting Table

I am almost finished with another 32 Celtic infantry figures. This will give me two x 32 figures or 64 figures of Celts. Hannibal considered them to be fodder against the Roman soldiers, hoping that the Celts would wear down the Romans and then he would unleash his African (Libyan-Phoenician) veterans on the worn down Romans.

With the arrival of these new boxes of figures, I will likely start work on the Spanish cavalry after the Celtic infantry are finished. Here is what I have in the pipeline:

If and when I get through the above lot, then I might consider adding a third Roman legion (112 figures).