You Always Remember Your First - Romans That Is

The other day I painted two samples of the HaT Roman Triarii figures. These are what you and I would likely call "Legionaries" because they wear chain mail protection and carry large shields, etc. They were the third line of the Republican Roman battle formation. The first line was comprised of skirmish infantry called Velites; the second line was manned by Hastati; and the third line was anchored by the armored Principes and Triarii soldiers.

These two samples were really fun, fun, fun to paint and I expect to have 16 painted by early next week. The shield designs were copied from the box art that comes with the figures. I suspect that the design is for the early Imperial Rome period but I wanted to give it a try. No one makes shield transfers for these figures in 54mm so the shield designs have to be painted freehand.

Sadly, the HaT Roman Triarii figures (set 9017) are no longer in production so the one box of 16 figures in my possession will likely be my only unit of these types of soldiers. Sigh (as Stokes would write). There must be thousands of them "out there" in either painted or unpainted form, but I have had no luck in sourcing any more of the figures. I have been scouring the world looking for these figures from distributors in places such as the UK, France, Germany and Australia, with no luck. If you happen to have any painted or unpainted HaT Triarii, then get in touch with me and I will gladly withdraw vast amounts of Dinarii from the Roman treasury to send to your barracks.

Yesterday I visited the Old Toy Soldier Newsletter (OTSN) soldier show in Schaumburg, Illinois. Once a year, collectors of, well, old toy soldiers, convene with their wares to sell and buy and trade figures. I hoped that with all of the plastic figures for sale that I would find a box or two of HaT figures. I had no such luck but I did make a few, ahem, purchases while I was there. These included a display of 30mm Elastolin Vikings/Saxons attacking a castle wall defended by some Normans. The set include the Elastolin siege tower, which is hard to find and I had wanted one of these back in my youth. It also include a trebuchet, catapult and several mantles. I was very happy with this purchase. I didn't take any pictures, but will do so after I unpack the figures and set up the diorama.

I also purchased a 54mm section of the Alamo barracks that looks like it could used in my Sudan and Khartoum games; some 54mm knights of Agincourt, and some John Jenkins Designs Republican Romans (including Scipio Africanus himself). The latter is expensive but how could I pass on a Scipio figure - a gift to myself. The company also makes a Hannibal figure that I will likely purchase in the near future. I also bought a pair of 40mm war elephants (with Howdah and two spearmen, plus a mahout), painted, that fit in nicely with the HaT elephants that I already have.

Afterwords I visited the Games Plus store in nearby  Mount Prospect, IL to pick up some primer and paint supplies for my Punic Wars Project. I am fortunate to have a really excellent Old School type of hobby and game store within a thirty minute drive from my house. The four cans of Vallejo grey primer and a can of spray gloss coating should last me through most of the project. I foresee a visit to Pet People to look for some aquarium Greek or Roman ruins to use for 54mm game terrain.

And finally, a preview of the next unit of Carthaginian Lybians that are currently on the painting table. 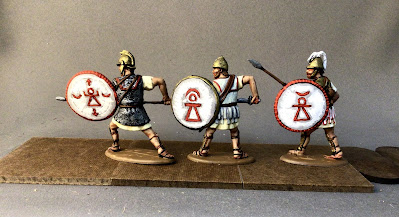 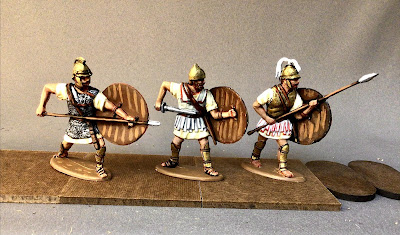 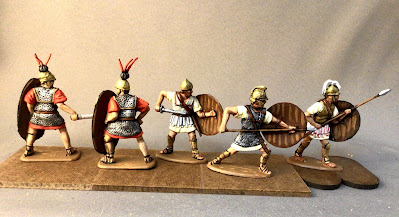