Today I completed the painting of a second set of 16 Punic War Spanish Allies for my 1/32 scale (54mm) Hannibal Project. The first set of 16 figures has predominantly red-brown shields and the second set has green-white shield combinations. This makes it easy to tell which figures belong to which infantry unit. 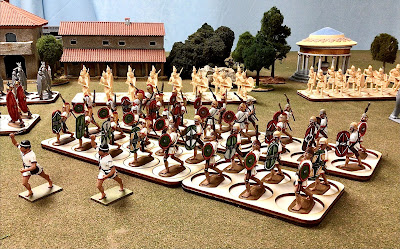 I will eventually have 4 x 16 units of Spanish infantry, 2 x 16 Africans, 2 x 16 Celts, and 1 x 16 Veterans and 1 x 16 light skirmishers in the Carthaginian army. There will also be 5 elephants and one or two units of Numidian light cavalry and one unit of Carthoginian/Spanish heavy cavalry.

So while I seem to have settled on fielding 16-figure units in two ranks, other possible organizations might include 24-figures in three ranks or 32-figures in four ranks. While "bigger is better" seems to be my way of thinking, I want to keep the infantry units at a size that will allow me to use a 6ft by 12ft table and have three feet of open space on each flank. The math indicates that my infantry has to fit into a space of 6 feet in order to have three feet of open flank space on each end of the table. An 8-figure frontage takes up about 14-inches so I could pack in four infantry units frontage in the six foot area in the center of the table and have an equal number of units forming a second line of infantry.

If I used 24 figures in three ranks and eight files, then the frontage is still the same as that of the 16-figure units. However, this means that I would need one and a half boxes of figures to create a unit, whereas the 16-figure unit equals the contents of one box of figures. A 36-figure unit would have to be in four ranks by eight files. See the picture below for an idea of what this might look like.

When going to four ranks, do you think that visually it looks better to have a wider frontage of, say, ten figures or even twelve figures?

FYI, the figure bases shown in these pictures have 40mm round bases that fit into the sabot.

While I work these things out, tomorrow I will start washing more figures in soapy water, and then spritzing them with white primer as I will soon be running out of my stock of primed-and-ready-to-paint figures. I will start on a 16-figure unit of Carthaginian Veterans wearing chain mail, tomorrow, and plan on having them finished by the end of this coming weekend.

Notice: If anyone has any spare HaT Punic Wars figures that they would like to sell, then send me an email or leave a message in the comments section below. I'm particularly looking for boxes of Roman Triarii and Carthaginian Veterans. I'm also looking for Numidian, Roman, Spanish and Carthaginian cavalry boxes.