We Found The High Ground At Gettysburg

GPS and Siri difficulties not withstanding, we rolled into Gettysburg on a tuesday evening and checked into our hotel, The Inn At Cemetery Hill. The accommodations were a bit better than expected and the hotel was within a block of the intersection of Steinwehr Avenue and Baltimore Pike. In other words, smack dab in the middle of things.

Our initial approach march into Gettysburg came from the west, along the Chambersburg Pike, following the path of the unfortunate Confederate General Henry (Harry) Heth. Lelia was absolutely gobsmacked when we drove over the ridge and there in front of us lay McPherson's Ridge and Barn and the full view of the ground where the first day's battle was fought.

After we unpacked our bags from the baggage train, we did a little exploring of the town and it quickly became apparent to me that there was a noticeable lack of places to have breakfast on the next morn. There appears to be a business opportunity here for some enterprising individual. Fortunately, Lelia had spied the Lincoln Diner on our way through town and after taking another look at the place, it looked to be a suitable site for some morning grub.

The next morning we arrived at the Lincoln Diner and both had a breakfast of fried hardtack with pork fat. Ok, we really had French Toast and Bacon and some Diet Pepsi for our morning serving of caffeine. I highly recommend coming here for breakfast if you happen to be staying in Gettysburg. 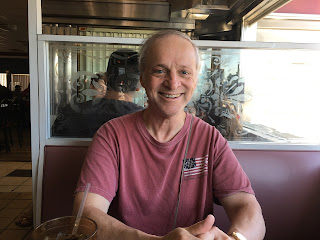 After breakfast, we headed over to the Gettysburg Vistors' Center, figuring that it would be a good start for Lelia so that she could get a summary overview of the battle and to view some of the artifacts in the museum. We watched a short film and were ushered upstairs for a viewing of the famous Gettysburg Cyclorama. I was trying to find the Visitors Center in its old location on Cemetery Hill, but then later realized that it had been razed and moved to a new site in 2008. My last visit had been in 2007. The building is nicely rendered in an octagonal shaped structure that calls to mind some of the octagonal barns that one sees in this part of Pennsylvania. 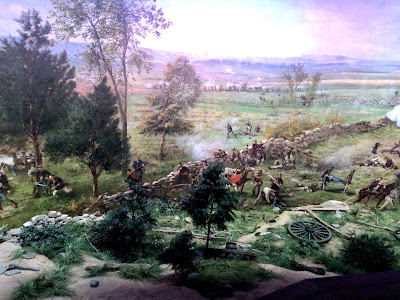 Here are a few of the thousands of artificts on display at the museum .

After viewing the museum and the Cyclorama painting, we drove over to Cemetery Ridge to look at the monuments and kill some time whilst waiting for a park ranger tour of Little Round Top at 2PM.

There was no holding back of Lelia when we reached the massive Pennsylvania monument on Cemetery Ridge. She was determined to climb the steep spiral staircase inside that leads to the rooftop terrace of the monument. Given her Cerebral Palsy, I wasn't sure that she could make the climb, but she soldiered on and made it to the top with relative ease. I was more worried about the stairs than she was - well, actually, she wasn't worried at all about the staircase.
The climb to the top rewards your effort with some magnificent views of the entire battlefield. The pictures below start with the view north towards Ziegler's Grove and panning south towards the two Round Tops.

It was getting close to 2PM so we descended the spiral staircase and hopped into our car for the short drive to Little Round Top. A park ranger was scheduled to give a talk and one hour tour, starting at 2pm. If you are ever at Gettysburg, take advantage of the free park ranger tours. You can also hire a licensed battlefield guide for a fee and spend several hours up to all day on this type of tour.

One of the little factoids that I learned from the Park Ranger was that the fight of the 20th Maine did not play out like Hollywood depicted it in the movie "Gettysburg". Of course I knew that; I just didn't know how. We are all led to believe that the 20th Maine was in a death match with the Alabama brigade to see who could control the hill and win the battle. What really happened was that the 15th Alabama was exhausted and fairly well knackered by the time it made its last ascent of Little Round Top. Unlike the movie, there were actually something on the order of 3,000 Union soldiers atop Little Round Top fending off the 300 or so Alabamians and the outcome was really never in doubt. Furthermore, Jeff Daniels (I mean Colonel Chamberlain) did not lead a dashing charge down the hill to demolish the hoards of Confederates teeming at the bottom of the hill. The 15th Alabama was out of water, nearly out of ammunition and already at the break point when they heard the clatter of bayonets being affixed to the muskets of the 20th Maine regiment. They knew what that sound meant. That was enough for them (the Alabamians that is) and they skedaddled before the 20th Maine even started moving down the hill.
It was an interesting tour and I enjoyed watching Lelia's reactions as we explored the various parts of Gettysburg battlefield. We were getting very thirsty and sun burned by late afternoon, so we went back to the hotel to chill for awhile (literally chill in the air conditioning). We had dinner that evening at the Dobbins House, which was directly across the street.
After dinner, it was still light enough to drive around the park and see more sights. We ended up driving down the Emmitsburg Road and pulling the car off the road in a turn off that was opposite the Copse of Trees that were the focal point of Pickett's Charge. We made the walk from the road all the way up to the small rock wall and had a little bit of difficulty negotiating our way over the wall.

We had conquered Cemetery Ridge by about 8:30PM and decided to call it a day. A couple of gentlemen helped Lelia climb over the stone wall (thank you fellows!) and we returned to the hotel. We made one more little stop, at an ice cream store, for a well deserved treat at the end of the day.