While I have not blogged as much as I would have thought, I am still burning up my brushes at the painting table this past week. Twenty-one more Beja and Ansar joined the ranks of the Mahdi's army since my last blog post.

As of today, I have three Dervish war bands of sixty figures each plus one group of 20 riflemen, for a grand total of 200 figures. There are approximately 90 Egyptian and British opponents that have been painted since the start of The Great Plague.

With a growing Dervish force, it was time to start adding standard bearers to each war band. So I sorted through my various Beja and Ansar figures to find some that looked like they could be converted into flag bearers by the simple means of cutting off the sword and drilling a hole through the hand with a pin vise.

Flags were downloaded from a free site called War Flags. The detail on the flags is not very sharp and crisp, but they are good enough to do the job. The pictures below show the original figure and the converted figure. Some will probably note that the edges of some of the flags show some of the white paper, but rest assured that I have painted the edges of the flags after these pictures were taken. 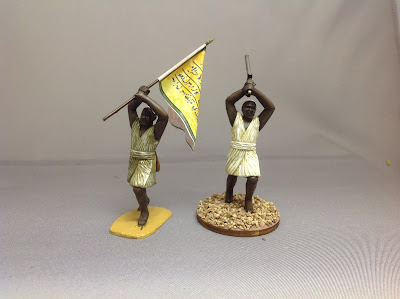 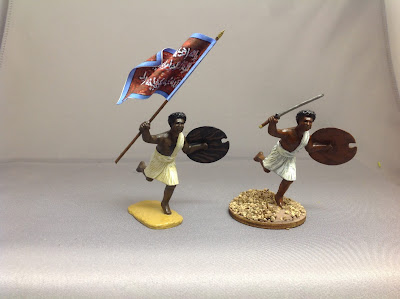 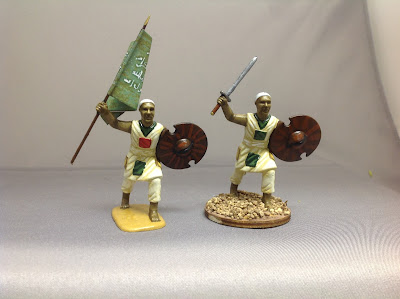 I also managed to get the Beja and the second Ansar units based. The bases are from Litko and hold 40mm round bases, which seem to be sufficiently large to accomodate any of the AIP plastic bases. The base sizes also leave enough wiggle room for the figures to sit comfortably on their movement trays. I am experimenting with 10-figure and 6-figure movment trays and I think that I prefer the look of the 10-figure sets.


The pictures don't show it very well, but the movement trays have been painted a light red-brown color and the individual figure bases have spackle paste dipped into a box of fine grit from Woodland Scenics. I have been told by numerous people that Aileen's Tacky Glue (or any similar tacky glue product) is the only glue that will hold the plastic figures to the wood bases. The white glue and the super glue products don't bond the plastic to wood very well and apparently the figures will pop off of the bases during handling. So I went with the tacky glue and eventually we shall see how sturdy the bond is in battle.

As of now, I do not plan on terraining the movement trays, leaving them painted. The round bases likely will not have any extra dry brushing effects or tufts added -- there are just too many figures to merit the amount of time that I would need to do a better looking job. However, when you are looking at hundreds of figures you are probably not paying too much attention to the stands.

What's next? I might paint the extra 20 riflemen that I have and this will finish off the AIP Dervish figures that I have on hand. Eventually I will order more boxes as I try to build the army up to 400 plastic figures. I have approximately 300 metal figures and 70 cavalry while Major General Pettygree has some 150 or so metal and plastic figures in his Dervish army. Our combined forces will be over 800 figures once I finish with the second hundred plastic Dervish. Can a 1,000 figure combined army be seen off on the horizon?