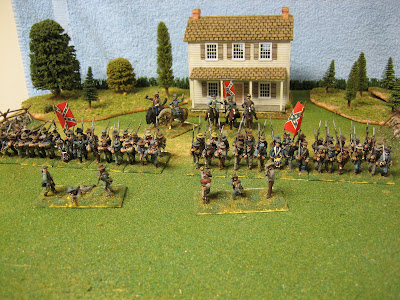 1st Tennessee and 7th Tennessee of Archer's Brigade (Heth's Division) circa June 1863. Figures are a hodge-podge of everything from Dave Alsop Old Glory figures, to Eagle, Connoisseur and one Dixon chap who's chucking rocks from the skirmish line.

Over the past several months I have been reading American Civil War books during my hour long train commute into the office everyday. Earlier in the year, I worked my way through Grant's Overland Campaign of 1864, courtesy of the four volume set by Gordon Rhea. Mr. Rhea's books are a pleasure to read and are well augmented by plenty of maps and orders of battle in the appendices. The series is highly recommended.

Next on the list was a new book about Champion Hill, a battle fought between Grant and Pemberton during the Vicksburg Campaign. Then Peter Cozzens recently published his new book on Jackson's Valley Campaign of 1862. If Cozzens wrote a book about the history of wall papering kitchens and bathrooms, I think that I would buy it sight unseen because he is such a good story teller.

Last week, I completed my reading of Stephen Sears' book "Chancellorsville" and found that it gave me a very good understanding of a complicated battle. It also dashed a lot of misconceptions that I had about the battle and Fighting Joe Hooker. I was rather surprised to discover how good Hooker's intelligence network was. He had Lee's army strength spot on, within a couple of thousand men and he knew where every brigade was deployed. This gave him a tremendous advantage at the beginning of his campaign. I left the book with a feeling that Chancellorsville was actually a winnable battle for the Army of the Potomac, after the first day when Howard's corps was obliterated by Jackson's flank attack. Days Two and Three were quite a different story. 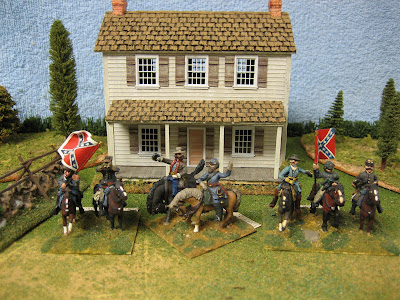 Harry Heth and his staff consider their next attack at Chancellorsville.

I am now reading Sears' book on the 1862 Peninsula Campaign, called "To the Gates of Richmond. More on this later. 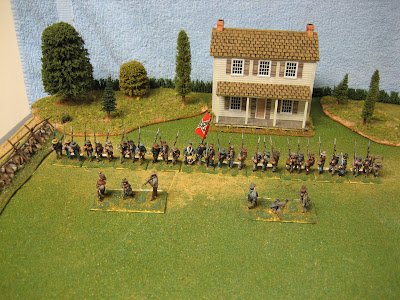 A Confederate regiment deployed in open order, with skirmishers in front. Building and fences by H.G. Walls; figures an assortment of everything, but mostly Dave Alsop's original Old Glory figures. Flag and basing done by Dennis Smail.

Tonight, I set up my wargame table with my ACW terrain and set up a small battle with two brigades per side. I am playing it as a solo game, so it takes awhile to get several turns in. I was up to the start of Turn Six when I retired to bed this evening. I will provide some updates as the battle continues over the next several days. Oh, and there will be a few more pictures as well.
Posted by Der Alte Fritz at 1:07 AM