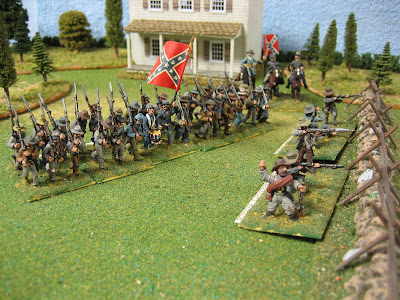 Last evening's Civil War posting was done at one in the morning and I was unable to provide better information on the books that I mentioned. Here then, is a more complete ACW bibliography with sufficient information to help you order any of these books.

I should note that Mr. Rhea will be publishing his next book in the Overland Campaign of 1864, called "Crossing the James" as the tentative title. Look for this during the first half of 2009.

As you can see from the list above, I have been doing quite a lot of reading on the ACW over the past year and I look forward to following Gordon Rhea's series and then diving into Hennessy's book on the 2nd Bull Run (Return to Bull Run, I believe it is called). All of this will come after I finish my current book on McClellan's Peninsula campaign, by Stephen Sears. After that, I will finally read the two Michael Priest books, "Before Antietem, the Battle for South Mountain", and his book on Antietem.

ACW Rules
Several readers asked me which set of rules I use for my Civil War wargames. The answer is, a house set of rules that are a variant of "Rusty's Rules for Horse & Musket Warfare". My old gang of wargaming friends in Lexington, Kentucky developed this set in the late 1980s and early 1990s and we must have played a hundred wargames with them over the years.

The rules are used for brigade level games. By "brigade level", I mean that each player commands a brigade of 3 to 6 infantry regiments and a battery of artillery; or a cavalry brigade of 2 to 3 regiments with a battery of horse artillery. The figure ratio used in the pictures is 1 to 10, or one figure represents ten real men, although we initially used a 1 to 30, then later, a 1 to 20 figure ratio. We settled on 1 to 10 because it looks terrific, yet doesn't require too many figures to build up a battalion. By mid war, the average infantry regiment might have had 300 to 400 men, so that is 30 or 40 figures per regiment. I even have several 50 and 60 figure regiments and one 80 figure regiment.

Each regiment is based with ten stands of figures, so that everything is easily divisible by 10. Morale takes a basic morale rating of 1st class - 100%, 2nd class - 80%, 3rd class - 60% and 4th class - 40%. You deduct 10% from the total for each 10% of figures that are casualties. So for example, if you had a 40 figure regiment, you would base the figures 4 per stand on 10 stands. Once you lost a stand of figures, you would deduct 10% from your morale score, or 20% off if you lost two stands, etc. You roll a D100 and modify the score to determine whether or not morale is passed. I could probably cite all of the modifiers from memory without even having to look at the rules sheet.

I truly believe that ACW wargames should be fought at the brigade level, with the basic units being the infantry regiments. Read any ACW book, particularly the ones listed above, and you will quickly see that the action is all about the individual regiments and how they perform on the battlefield. The main concern in ACW battles, is being overlapped by the opposing brigade and thus getting outflanked. You see this time and again in various ACW battles.

Somewhere on my list of projects to do is a reprinting of the Lexington House Rules variant of Rusty's Rules. I have all of the play sheets etc, it is just a matter of sitting down at the computer for several weeks and putting it all together again.

Ah yes, this brings back memories of many happy days of wargaming for me.
Posted by Der Alte Fritz at 6:31 PM