Back in the mid 1980s Ian Weekley was the building modeler par excellence and his models usually graced the pages of Miniature Wargames. Everyone wanted to have an Ian Weekley model, well I did, for sure. So one day I decided to write a letter to Ian at the Old Anchor of Hope and asked him if he was interested in taking on a commission to make the Leuthen Church and some period houses.

We didn't have this Internet Thingy in 1986 so one had to write a letter and usually include some IIRCs (international reply coupons - remember them?) and then hope for a response. To my utter surprise I got a return letter from Ian in which he said that he would be delighted to work on my commission. Over the years I had Ian make some other models for me including a windmill, a city gate and a North German farmhouse.

In retrospect, Ian Weekley's models were rather "quaint" and rudimentary by today's standards. For example, the timbers of a half-timber building were made using indelible markers and window shutters were mere pieces of cardboard that lacked any paint or detail. But at the end of the day, Ian's models were quite lovely and I think that they rather stand up well in today's era.

I decided that it was time to put the Hannibal project on the back burner (it is nearly finished anyway) and get back to painting Minden Miniatures Seven Years War figures. Specifically, I want to get back to the new Austrian and Prussian armies that are based in three ranks on a 60mm by 80mm base. The stands have two rows of soldiers and then there is a thin third rank of officers, NCOs and other file closers. I currently have seven Austrian battalions and three Prussian battalions that I have painted and based in this manner.

I wanted to put the existing units in this project out on my game table and I thought that it would be a great idea to go Old School and bring all of my Ian Weekley buildings out of storage. One nice touch: Ian signed all of his models and wrote down the year that it was made, which tells me how old the model is and when it was made.

The picture below shows my game table. I have enough Ian Weekley buildings to build two villages. I put the villages in the corners of the table so that they do not impede the traffic flow of model soldiers. I also like to turn the buildings on an angle rather than using a rectangle layout. Shifting the rectangle into a diamond shape creates a more interesting focal point for the terrain layout.

The church model was made by me. Really! I was getting ready to run my first huge Leuthen Invitational Wargame and it appeared that Ian wouldn't have the Leuthen Church model done in time for my game. A Leuthen game simply must have a church so I made my own. Looking at it now, I think that it is a pretty good job for an amateur and to this day I have no idea of how I managed to pull it off. The walls are made of think plywood and somehow the steep angles of the end walls were nearly perfect. All this using small Exacto tools rather than professional tools and saws.
My church tower has an interesting construction: I made a tall rectangular tube from plywood and was able to slide it into a cut out slot that I made in the front of the church. The top of the steeple added a smaller mini rectangle tower, topped with a ping pong ball for the onion dome. The ping pong ball used to have a tooth pick spire sticking out of it, but this has been long gone, having broken off at some point along the line. I added some epoxy putty (green stuff) to shape the onion and attach it to the tower.
The roof was made from small pieces of card tile that I cut out from a cereal box. I had to glue each individual roof tile in row after row. Some pieces of card were glued to the tower corners to look like corner stones. The church windows were shaped with tooth picks and then the windows were simply painted black.
My friend Phil Olley says that every wargame table should have a windmill and I would have to agree with that. Ian made a wind mill model for me that looks very rustic by today's standards, but I love the model none the less. There is even a little platform on which I can place an officer figure to spot the enemy and to direct artillery fire.

Ian also made a city gate and tower for me. There is a short section of wall and a half timber house at one end. The interior side of the tower is a clock tower with the clock made from an old watch face. I'd like to make some more walls to use with this model so that I could have a walled town in the corner of my game table Someday. 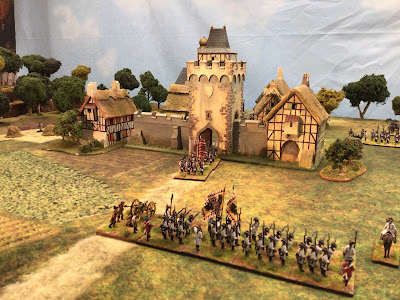 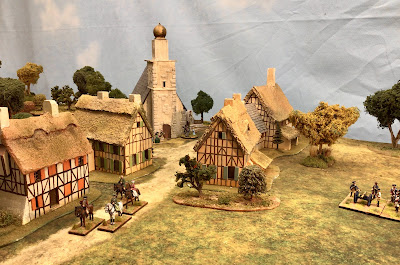 I have enough Ian Weekly models to make up two villages on the table. The second village is shown in the picture below. Ian made most of the buildings except for the on barely visible in the lower left corner. The town fountain was made by Herb Gundt . The cobblestone streets are a mat made by Lemak, a company that makes Christmas village models.

I am currently painting IR18 Prinz von Preussen for my three ranks basing system. My regiments in both armies have two battalions of 32 figures each. I hope to have the first battalion completed by this coming weekend

Going forward, you can expect to see a lot more 18th Century content on my blog.