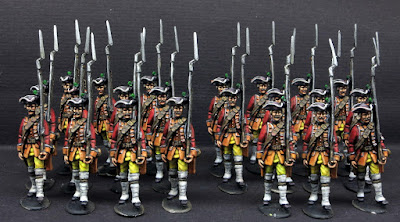 It is with deep regret and sorrow to hear that Richard Ansell passed away on February 11, 2021 due to complications with an old injury. On the way to having exploratory surgery to repair old wounds from his reenacting days, he suffered a heart attack from which he did not recover.

Those of you who are regular readers of my blog will know that Richard sculpted both the Fife and Drum Miniatures AWI and Minden Miniatures SYW figure ranges. Richard's talents also extended to such fine figure ranges as The Assault Group, Alban Miniatures, Crann Tara, Rif-Raf Miniatures, Hasselfree Miniatures and many others.

While Richard could sculpt in almost any style, his trademark style was a more anatomically correct and proportioned style, sculpted in the 1/56 scale (approximately 30mm high). Because his figures were done in a "scale" rather than a "size/height", they looked like real people rendered in miniature. At a time when the trend in figures was for "heroically proportioned" warriors with over sized heads, big hands and impossibly large weapons, Richard's anatomically correct style stood out from the rest of the crowd.

It was Richard's figure style that really caught my eye back in 2009 to 2010 when I stumbled upon the Minden Miniatures range, created by Frank Hammond and sculpted by Richard Ansell. The second I saw my first Minden figure, I knew that this was what I wanted to collect and paint. I bought lots and lots of Mindens from Frank, liking them so much that I bought the company when Frank offered it to me for sale.

Concurrently, I had started my own AWI figure range called Fife and Drum Miniatures in 2010. Richard was the sculptor for the range and I couldn't have made a better choice in sculptors. In addition to his exceptional sculpting talents, Richard was the nicest man that you could ever hope to know and he was a pleasure to work with. As noted above, he sculpted on commission for many other companies, so I had to wait in the revolving queue for my turn to have him sculpt figures. He worked at a pace of 8 figures per month, with 16 figures being the normal amount of figures that one could put into a standard master mould. So each commission was for 16 figures.

Every few months I would get an email from Richard saying "well Jim, what shall we do this month?" We would go over a few ideas with me giving Richard some broard perameters and ideas. Then I would sit back and wait, like a kid on Christmas Day, to see what wonderful goodies would appear two months hence. In some instances I would just give Richard some general ideas and tell him to just "go for it and stretch the bounderies of your  imagination". And the results always exceeded my expectations, particularly when it came to the personality figures, where he could really let his talent run free with creativity.

A great example of Richard's creativity in one of those "just go for it" moments, was when he made this sculpt of the Prussian hussar general von Zieten. This was sculpted as a special commission for one of our Minden Miniatures customers. The customer sent me a picture from a historical print and Richard rendered it  in green epoxy putty to perfection.

It is very sad to see such great talent leave us, but even more so to lose a friend. I extend my condolences and best wishes to Richard's wife Coral. Richard, we are all better for having brushed up against you. Take care old friend.