Today is the anniversary of the battle of Leuthen, fought on December 5, 1757. Leuthen was Frederick the Great’s signature battle in which his army of 33,000 men utterly defeated the larger Austrian army(65,000 men) commanded by Prince Charles of Lorraine.

I have wargamed Leuthen a number of times and I thought that I would share some pictures of the battle that I played as a solo game circa 2016. The game had a central table measuring 6ft by 15ft plus a back table of 3 x 15ft on each side to provide depth for reserves. The Prussians prevailed up to the point where they were getting ready to attack the Leuthen churchyard, and then I stopped the game. Yet the Austrians made a tough fight of it, especially in the grand cavalry melee at Sagschutz between Zieten’s Prussian advance guard and Nadasdy’s Austrian cavalry of the left wing. Had the Austrians won the cavalry action they might have stopped the rest of the Prussian attack.

Here are some of the pictures of the game: 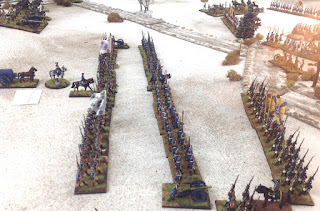 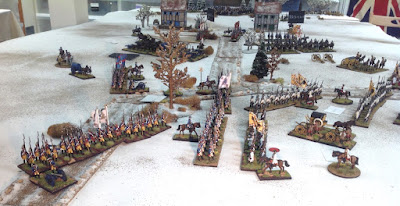 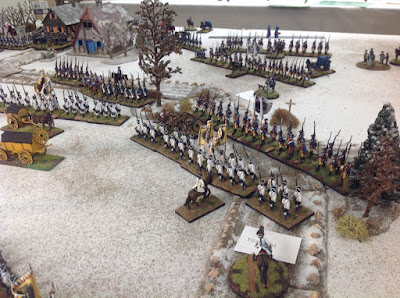 I would post more pictures but the new Blogger format makes it difficult to do so. I’m exhausted from all of this cutting and pasting, etc. I think that I’ve posted enough pictures for to get the general idea.