AIP Egyptian Infantry in Summer Uniform
A week or so ago,  I received my first two boxes of Egyptian infantry in summer uniforms, from AIP. I wanted just a small order ($9.00 per box won't break the budget) to get a first hand look at the Egyptians before committing to a larger number of figures.

The Egyptians are not as good looking as the Dervish, primarily because some of them have a 2-dimensional look to them (see the officer on the far left in the picture below) that reminds me a bit of the 40mm Prinz August home cast figures. (Well, the AIP figures are a little more rounded than Prinz August, but you get my point).

The figures all have flimsy bayonets that should be cut off and replaced by a piece of wire. When I use the word "flimsy" I only mean that the end of the rifle and bayonet bend rather easily, which would eventually cause the paint to break, chip and flack off. Replacing the bayonet gives the weapon a little more stoutness that should withstand the wear and tear of play.

I did a test sample on the two charging figures, reasoning that if I screwed up on the hole drilling and decided that the figures didn't have enough plastic to convert the bayonets, then at least I hadn't messed up any of the other figures that I wanted to keep. Fortunately there is just enough plastic in the bayonet to rifle join to accomodate the drilling of a hole.

Last evening I painted three samples (pictures to be provided later) - the officer, standing firing, and standing at the ready. The figures are easy to paint with no difficult bits to paint. I used Krylon grey primer to prime the figures. One nice thing about these figures is that you need not glue them to pieces of card so that you can hold onto the figures whilst painting them. The plastic bases are large enough to suit that purpose. 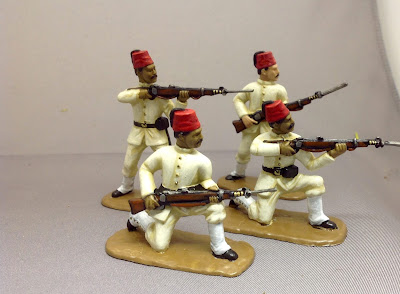 On the whole, I like these figures and plan on painting a 32 to 40 figure regiment of them to use in my Sudan Project.