The new greens are currently at Griffin Moulds to have the production moulds made and inventory cast for the new figures. The Mohawks should be available for sale at this year's Seven Years War Association Convention in South Bend, Indiana (April 2nd, 3rd and 4th 2020).

The Mohawks were allied with the British and were attached to both Burgoyne's army and St. Leger's British armies. In the latter case, I am looking forward to recreating the Battle of Oriskany as soon as I have castings and the time to paint them. 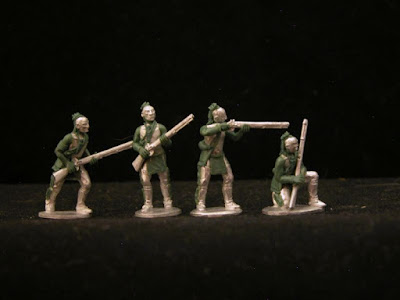 Note that because the Mohawks are part of the F&D AWI figure range, that they will be available for sale in both the USA and the UK.