I want to wish everyone in the U.S. a warm and happy Thanksgiving. I hope that everyone can be with their families, gorge themselves  on turkey, fall into a turkey coma by the end of the day, and sneak in a bit of NFL Football.

Avoid Talking Politics
One word of caution: avoid discussing politics with your family. You've known them for, say, 30-40-50+ years and you aint gonna change their minds about any political topics. It's not as if your 30-year old cousin is going to do a face palm and shout, " by God, you are right. I should have been a Democrat all of these years!"

You know and I know that this is not going to happen. So avoid political discussions and limit the conversation to the weather and to family (as Professor Henry Higgins advised to Eliza Doolittle).

The Annual Pumpkin Pie
Every Thanksgiving, I take it upon myself to bake a home-made pumpkin pie from scratch. I do not use a store-bought pie crust (which tend to be hard, dry and taste like saw dust), but rather, make my own dough and crust which ends up having a tasty and not-dry taste to it. Your pie crust can make or break the quality of your pie. If you happen to have a copy of "The Joy of Cooking" cook book, then look up the recipe for pie dough and follow the very easy instructions. You will have fun making your own pie and dough - my daughter Lelia helped me this year and we had a lot of fun doing a project together.

The best part, you get to eat a delicious pumpkin pie the next day (if you can wait that long!).


Biscuit Tin Labels
Here is packaging label for some English biscuits (cookies, to those of us in North America) that caught my eye and so I thought that I would share it with you: 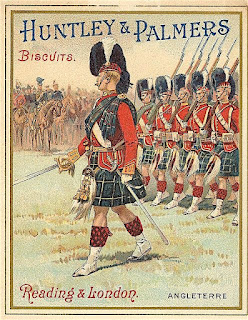 The Huntley & Palmers Biscuits label was probably made in the late 1800s, judging from the uniforms of the Highlander regiment. I wish that consumer products today had such high quality and visually appealing labels as they did around the turn of the 20th Century.

For the past several weeks I have been repainting some old Wm. Britain's toy soldiers to use in my Sudan toy soldier games. I have acquired 20 or so Egyptian Lancers on eBay and hope to build the force up to 24 figures. Early in the process, I wanted to keep the figures looking old and beat up in an Old School manner; however, one problem with toy soldiers is that they fall over easily. This led me to considering a way to base the figures, war-game figure style, so as to fix the falling over problem.

I bought some enamel paints so that the figures would be glossy as befits toy soldiers. I have rarely worked with enamels so it is a bit of a learning experience for me. Enamels take awhile to dry - versus near instant drying of acrylic paint - so I learned that after about an hour or two, I could return and paint another part of the figure. The painting process is slower, but this is offset by the relative simple look of the Britain's toy soldiers and their lack of detail.

Once the first dozen figures were repainted, I attached them to MDF bases of 40mm by 80mm and finished them off with spackle compound for the ground, dipping the bases into a pot of fine gravel or railroad ballast. Then followed a little bit of dry brushing on the bases and the gluing on of a few tufts of grass to complete the basing, as shown below:

Now some people might believe that repainting the figures destroys their value as collectibles. To that I say, "I don't care - I plan to play with them." I only repainted figures that had obviously been repainted previously, while leaving the four or five figures with original paint jobs alone. Some of the older repaints were poorly done, with paint just slapped carelessly onto the figures. They look much better under my brushwork.

I still need four more Egyptian Lancers to complete a 24-figure unit. So if you see any on eBay, please don't bid against me until I get the last four that I need. After that, the field is all yours on eBay LOL!

Repainting and basing the lancers makes me like them all the more and I look forward to using them in the next toy soldier game, which is tentatively scheduled for the week between Christmas and New Year's Day this year.