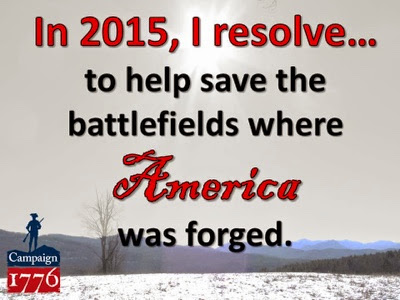 I want to bring it to the attention of my readers that the Civil War Trust has recently established a related organization that will focus on saving and preserving battlefield sites of the American Revolutionary War in the United States. The CWT has saved thousands of acres of historical land from developers by acquiring it, using donations and Federal and State matching funds. The land is held in trust and eventually turned over to the National Park Service or similar organizations. The CWT has been at the forefront in leading the fight to save valuable acres at such sites as Fredericksburg, The Wilderness, Brandy Station and Franklin, among others.

Now the aim is to use the same model to save sites from the American Revolution.  I have cut and pasted their message below.

Happy New Years from Campaign 1776, a project of the Civil War Trust!

Does your New Year's resolution include helping to preserve American history? Ours does! Battlefields are monuments to American valor, sacrifice, and determination. Campaign 1776 is the first-ever national initiative designed to preserve these tangible and irreplaceable links to this country's founding. Join the cause, preserve American history, and become a charter member of Campaign 1776 in 2015! http://www.campaign1776.org/battlefields/princeton/princeton-2014/